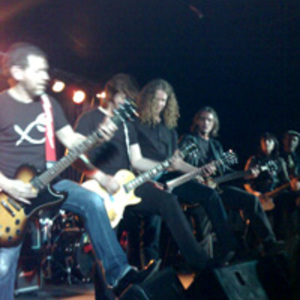 There are at least four acts called "Salmon" 1. The Washington DC-based solo act. 2. The band from the Netherlands 3. A side project for Australian legend Kim Salmon 4. Northern California's South Bay Area band combining hip-hop, funk, hard rock and metal 1) Washington DC-based solo artist Salmon, who has a debut single in "A Minor Affair." His EP is set to come out in November 2010 2) SALMON is an enthousiastic "pur sang" symphonic rock band from the Netherlands with members who are highly influenced by several musical trends.

1) Washington DC-based solo artist Salmon, who has a debut single in "A Minor Affair." His EP is set to come out in November 2010

2) SALMON is an enthousiastic "pur sang" symphonic rock band from the Netherlands with members who are highly influenced by several musical trends. This fact means, SALMON's repertoire consists of two hours authentic and varied sympho rock: in other words dynamic, rhythmic and versatile. You will recognize the influence of symphonic rock from the seventies instantly, next to baroque and classical music from the 18th and 19th century. All this comprises the unique SALMON sound!

SALMON starts off through the renewed contact in October 1997 of keyboard player and lead singer Jan Jaap Langereis and bass player Sven de Haan. They used to be fellow members of an Amsterdam based symphonic rock cover band. A few years and many other bands later, Sven puts an advertisement in a Dutch magazine that specializes in symphonic rock music, called IO-pages. Jan Jaap responded with in the back of his mind the successful collaboration in the past.

After months of so called "attic rehearsals", Henk Sonnenberg joined them. Henk used to be the drummer of the before mentioned Amsterdam based cover band and had remained Jan Jaap's friend over the years. At more or less the same time (May 1998), Jan Jaap spotted an advertisement in a local newspaper in which a "symphonic music-minded" guitarist, Gerrit Hoogebeen, was looking for employment. Contact was made and a few days later the SALMON line-up was complete.

The School of music in Heiloo, where Jan Jaap teaches, was found to be and still serves as a very appropriate venue for the rehearsals. The school was also the place where the name SALMON was decided upon.

The name SALMON stems from the idea that we consider our music to go against the mainstream of nowadays music. As the salmon struggles to swim upstream to find her hatching place, the music of the band SALMON does the same by being averse to the popular tunes we hear today. The musicians approach their music with a non-commercial attitude and refuse to make any concessions as to the end result. Hence the term: swimming against the tide.

On the 31st of July 2000, Henk Sonnenberg informed the other members, he would quit the band and on the 27th of August 2000, he was subsequently replaced by Robbert Schuster: a drummer with a melodic-percussive style.

On May 4th, 2002 a new drummer has completed SALMON again. We welcomed Michel Nieuwenhuis from Heiloo (living just 300 meters from Jan Jaap!) He has lots of experience in prog- and jazz-rock music!


3) Salmon is a side project for Australian legend Kim Salmon. Who's past bands/projects included The Scientists, Beasts of Bourbon, Kim Salmon & The Surrealists, Antenna, Darling Downs and off course his solo work.

The band released only one album Rock Formations in May, 2007. The album was released on both on CD as well as limited double LP with only 500 copies pressed. The album is in two parts, the first half is made up of songs recorded at rehearsal, and the second half recorded live at the Metro in Sydney.

4) Rearing its head from the depths of Northern California's South Bay Area music waters,Salmon has been creating quite a stink on the local (San Jose/San Francisco) scene over the last couple of years. Hailing from Gilroy, CA, a community most famous for being the "Garlic Capitol of the World", it's SALMON that has quickly become one of the city's most potent exports. Already banned from playing their small hometown, Salmon's growing popularity, and unruly die hard fans have forced the band into larger venues more suitable for the band's monster jams and swirling mosh pits. The foursome, which manages to smoothly incorporate musical styles that range from contemporary hip-hop and funk to hard rock and metal on their new album "Paco, drop the chicken!", certainly doesn't swim against amongst an established school of hard-core bands. Adding raps to funk-metal grinds, Salmon perhaps faces an upstream swim when asked to describe their music, but, as with their namesake, it probably just makes them stronger. Vocalist Lawrence Martinez heads the bunch with unfailing energy, crankin g out every song with the spastic energy of a five year on two bottles of Jolt and guarana, along with bandmates Aaron Goodwin (guitar), Tom Walker (bass), and Pat Ruiz (drums).

When The Dust Settles