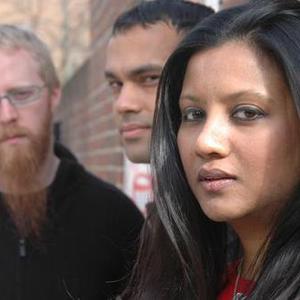 Sacha Silva is a Canadian-born guitarist of Sri Lankan and Bulgarian blood. Together with singer Munya B. (a.k.a. Sanghamitra Bandyopadhyay, UK/India) and percussionist/composer Drew Morgan (UK/US), the trio creates a new kind of world music, one which speaks to a new generation of global wanderers, travelers, immigrants, expats and half-breeds. Their music has been described by independent music pioneers CDBaby.com as "unforgettable and startling in the most powerful of ways" with a "stunning, captivating voice that leaves a lasting impression."

The band has recently released its second CD, "Anatomy of a Coup". The CD is based on Sacha's two-year journey through the South Pacific, Sub-Saharan Africa, Latin America and the Caribbean and was inspired by the 2006 military coup in Fiji. "Anatomy" was recorded at the idyllic Hatch studios in the English countryside with pre-production at Calle Noray in Malaga, Spain. The CD has already featured in the CMJ New World Top 20 and has received radio airplay on four continents. The CD features a bolder, tighter sound, one sure to broaden even more the appeal of this remarkable trio.

"Anatomy of a Coup" follows from the trio's debut CD, "Susurro" (meaning 'whisper' in Spanish), recorded in London in 2003. Within a month of its release, "Susurro" was a front-page feature on CDBaby.com, the premier online source for independent records in the US, which gave the CD a five-out-of-five "Editor's Pick" rating, calling it "jaw-dropping", "unforgettable" and "passionate". "Susurro" was featured on radio shows throughout the US and Europe (including BBC radio) and its creation was even the subject of a university thesis.

The trio was formed in London in 2000 when the three global wanderers ended up as neighbors. Sacha had just finished studying and performing flamenco guitar in San Francisco and southern Spain and Indian classical music in Delhi. In 2002, while accompanying flamenco and Indian Kathak dance classes, Sacha met Munya, a fellow student in economics. Munya brought years of training in North Indian classical music, including several performances for All-India Radio. Soon after, the pair met Drew Morgan, Fellow of Composition at the Royal Academy of Music, who had just moved from Chicago. These three students, living across the street from one another, began to write and record together.

The band members are based in Malaga (Spain), Bogota (Colombia) and Oxford (UK). The trio is self-managed and releases all of its materials through its own label, Migrant Worker Records.

Anatomy of a Coup