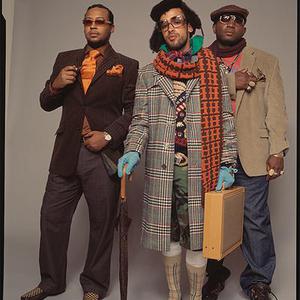 Formed in 2000 the group consists of Om'Mas Keith, Taz Arnold, and Shafiq Husayn. They are producers, musicians and performers from New York and Los Angeles. They have undertaken production and remix duties for artists including Pharoahe Monch, Erykah Badu, Jill Scott, Dr. Dre, Bilal, Goapele, and Jurassic 5 amongst others. Their sound could be described as funk with definite George Clinton influences but they have added a contempory twist that has generated a significant buzz.

Several singles and recordings have been released under the group's own name, primarily on independent labels such as ABB Records, Ubiquity Records, and Sound in Color and on various compilations, and include the cult hit "Glorious," and singles "Double Dutch" and "Second Time Around." Newer material was released on the promotional SetUps and Justifications album sampler in mid-2006, including songs such as "Big Fame," "Starwars," and "Hollywood." Their "Second Time Around" single was released in CD format and is generally available from major online retailers as well as iTunes. The group's original vinyl singles ("Double Dutch" and "Glorious") were limited releases on Ubiquity Records. A full length album, titled The Hollywood Recordings, was released on Babygrande Records on April 24, 2007.

The group has said that their sound is unlikely to gain any MTV attention.

Feel The Bass BW Not On Our Level VLS