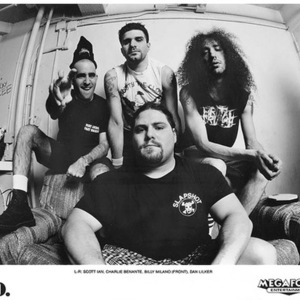 1) S.O.D. (Stormtroopers Of Death), formed in New York in 1985. They are commonly credited as being among the first bands to fuse hardcore punk with thrash metal into a new sound dubbed crossover thrash. They have also been the victim of controversy due to their utterly politically-incorrect lyrics. However, Dan Lilker has stated that ?The lyrics were never intended to be serious, just to piss people off.?

Stormtroopers Of Death includes the famous Billy Milano (M.O.D.) on vocals, Scott Ian on guitar and Charlie Benante on drums (both of Anthrax fame). Also, bassist Dan Lilker has been in many other underground metal bands, including Brutal Truth, Nuclear Assault, Exit-13 and early Anthrax among others.

S.O.D. don't always write songs to anger, but often pen lyrics to amuse. For instance, in response to their (misconstrued) earlier lyrics, S.O.D. wrote the politically-correct (and Agnostic Front-esque) We All Bleed Red: a track that condemns racists and racism. Also, S.O.D. include healthy doses of humor for the metal fan, poking fun at Slayer (Seasoning the Obese), Celtic Frost (Celtic Frosted Flakes), and King Diamond/Mercyful Fate (King at the King/Evil Is In). The cover to Bigger Than the Devil is a tribute to the classic Number of the Beast by Iron Maiden.


From The BNR Metal Pages (http://www.bnrmetal.com/):
?06/25/02 : Following personal disputes between Billy Milano and the two Anthrax members (Scott Ian and Charlie Benante) concerning the ?Behind The Music? VH-1 program on Anthrax (Milano felt that Danny Lilker was slighted) the band is once again disbanded. ?


2) Sound of Disaster, a Swedish hardcore punk band active in the 80's, famous for their shows at the occupied building "Ultrahuset".

3) Sod was a funk-rock band from Los Angeles in the early 70s. They released a single self-titled album in 1971.

Bigger Than The Devil