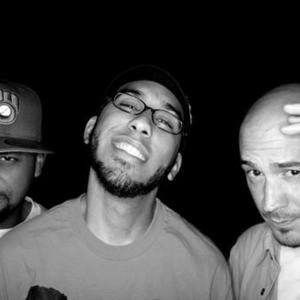 The Rusty Ps is a hip hop/rap group based in Milwaukee, Wisconsin. Initially known as the Rusty Pelicans after forming in 1995, its membership currently consists of Phantom Channel (MC), Count classic (MC), S Watson (production), and MadHatter (DJ). The story of the Rusty Ps begins in 1982 when S Watson attended kindergarten with the Phantom Channel. The two attended Neskara Elementary in Milwaukee, WI, for their first year of school.

The story of the Rusty Ps begins in 1982 when S Watson attended kindergarten with the Phantom Channel. The two attended Neskara Elementary in Milwaukee, WI, for their first year of school. Watson, an import to Milwaukee from Chicago and Channel a Milwaukee native became good friends right off the bat but parted ways after this first year of school.

From there, Phantom Channel went on to attend school with the Count Classic. It was first grade at St. Sebastian's in Milwaukee. Count Classic soon moved to Madison WI.

Phantom Channel, remaining at "Sebs" for the rest of his grade school education soon reunited with S Watson in the 6th grade as Watson began attending St Sebastian's as well. They finished their elementary education there and parted ways for different high schools.

Count Classic returned from Madison and attended Nicolet High School. There he met Oneself and continued at Nicolet for his entire high school education.

Oneself, having left Nicolet after the first two years of high school, attended West Division High School. There he met Phantom Channel and Dana Coppafeel who had been attending that school since freshman year. Oneself reunited Channel with Classic, the old friends from first grade. They all graduated from their respective schools in 1995 and Phantom Channel and Mr. Smith went on to move into an apartment with their good friend Count Classic.

Already music lovers and hip hop "heads" the four, Classic, Channel, Oneself and Coppafeel, remained friends and having learned much of the culture of hip hop in high school began small freestyle sessions with other local aspiring rappers and also invested in a small beat machine, the DR-5. Meanwhile, S Watson went on to attend the University of Minnesota, Twin Cities. He left school after approximately 6 months and returned home.

With out any connections in Milwaukee, Watson called his old friend Phantom Channel and began hanging out with who would soon become the Rusty Pelicans. Watson remained in Milwaukee for 6 months and went on to attend a recording arts school, Full Sail, in Winter Park, FL.

It was during this time, 1996, that the Rusty Pelicans were taking shape in a basement apartment on Milwaukee's east side.

Free tracks can be downloaded at their offical website, www.rustyps.com.

The Shape of Things to Come