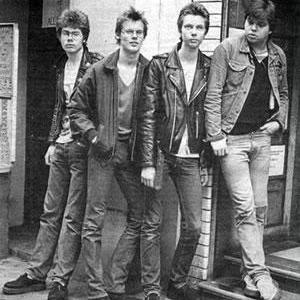 Swedish punk band formed in 1977 by four teens from the area of Hags?tra in Stockholm, Sweden. B?na (The Bean), the singer, was a friend to the band that got in as a member when they realised that he was perfect as the bands front man. The first song was "Raggare" that was an answer to a song by the artist Eddie Meduza (popular among raggare = Teddyboys) that made fun of the punk movement. The complete title of Rude Kids answer song was "Raggare is a bunch of motherfuckers".

B?na did a hard promotion job and succeeded to get the group recording contract in Sweden and even to make Rude Kids popular abroad. They was played by John Peel in BBC, got article in NME and played live concerts in London. A single called "Stranglers" was a new success for the band that nearly led to a tour with the wellknown english punk band Stranglers. The song was an answer to a Stranglers song, "Sweden all quite on the eastern front", that complained about the boring music situation in Sweden (one of the Stranglers, Hugh Cornwell, had lived in Sweden for a period in the early 70s). In the lyrics they just wondered why Stranglers didn't changed that with a Sweden tour. The Stranglers liked the song so much that it nearly led to a united tour. Some years later the career slowed down for Rude Kids and the band changed musical direction in the early 80s to a more pop related sound. They changed from english to swedish lyrics to give the listeners a deeper feeling for the lyrics. The end of the band came in 1983 when the singer B?na got killed in a car crash.

Raggare Is A Bunch Of Motherfuckers 7''

Worst Of... ...A Pardonless Collection