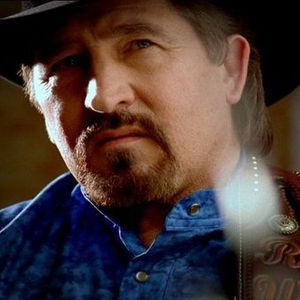 country/cowboy music He's a real-life generational throwback to Ozark mountain bank bustin' bandits. He's been a farmhand for Loretta Lynn, and he counts Garth Brooks as a mate after recording "Night Birds" (a track from Kimes' A DYIN' BREED release) with him. While many wannabes around Nashville strut their stuff under a wide brim and a fat buckle, hoping to steal fame by singing about what they don't know, Kimes has no such pretense.

This cowboy has sat tall in the saddle, seen the vastness of the range, roped and chased breakaway steers; he's ridden the trails, taken the falls, in the truest sense of the term, and survived. He's real. He's country.

Kimes has a now fast-growing catalogue of seven releases. To each album he brings a keen honesty and a sharp ability to paint and share lyrics of hurt and heartache, spirited horses and lonely trails, crooked bad guys and white hats that save the day. Kimes doesn't cobble an album together; rather, his collaborative works comes as keen stories, which keep the listener hooked. It's a balance that needs applause and recognition. There are no short cuts of chasing a potential hit or snagging CMT exposure, Kimes isn't about the quick clutch at fame; his style is passionate, caring and focused ? he's a long hauler, one who loves the journey rather than the destination.

Kimes, who has twice won the Academy of Western Artist's Will Rogers Award, returns with his latest, and in the minds and ears of a growing fan base, his best release, STRIKIN' MATCHES (Wonderment Records).

Stoked with 13 tracks, the album touches emotions, heals hurts, and brings into play the real need to embrace patriotic values; and, oh, there's also the customary appearance of raging bulls and bad dudes with guns. One of the country music's emerging lights, Kimes in his textured and expressive voice shares the cowboy way through reality-driven glimpses of life, love, and the view atop a hard saddle.

"Yeah, I've always been a cowboy," says Kimes in a 2004 interview, "I don't remember not wearin' cowboy boots, and I rodeod for years. What my music is," explains the singer who, years back, spent his first night in Nashville parked in his pickup at Shoney's with a shotgun for protective company, "it's country with cowboy attitude. I don't write that tumbleweed stuff."

And true to his word, there's no filler, fluff or throwaways here. From the opening homage of "I Come To Dance" (dedicated to Chris Ledoux & Sheb Wooley), on to the final cut "I've Got Your Back", Kimes delivers with tunes that move you in ways other than dancing. "Faster Gun", with its made-for-movin' shuffle, is so typical of Kimes' writing style. He cloaks his story line around cowboy imagery, but shares the broader simile of needed preparation to meet life's obstacles as the subtle undertone.

Tracks like "No Use", "Dancin' With You Again", "Bad Luck Is Gone" and the sad ache of "Danny Play", against its somber and moody trumpet solo, are shades of love sure to touch the thoughtful. For those who linger on such heart matters, "Strikin' Matches In The Rain", is a co-write with S. Wood. As a losin' at lovin' tune, it hits all the right nerves. The well-chosen metaphor of hoping against hope ? striking matches in the rain ? comes fully understood in the lyrics:

"I've Got Your Back", with its haunting bomp bai du dae dum chorus, is a crafted tale of a soldier writing from the war zone. Kimes uses his musical platform not to be overtly political or needlessly critical. Rather, he draws attention to a greater good ? we must not forget the effort, the interruption to family life, and the daily fear confronting those who fight the good fight on our behalf. The letter in the song has the soldier saying, "now we're hearing things?that can't be true?." The soldier's fears of rejection find answers when Kimes responds "old Glory's safe?fire another round?" It's a good song. It's a powerful song. It's sung by a man who cares.

Hangin' Around The Moon