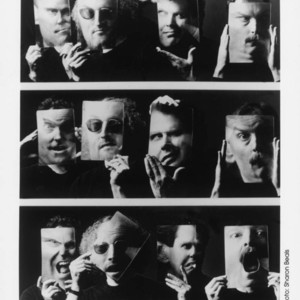 Their first concert became also their first album, Cinema Rovate' (august 1978), highlighted by Raskin's chaotic and cacophonous 21-minute Ride Upon the Belly of the Waters After The Bay (december 1978) with Italian percussionist Andrea Centazzo, the noise strategy of the group was perfected on The Removal of Secrecy (february 1979), particularly Ochs' 19-minute That's How Strong. There was method in their madness, but it was not easily detected within the dense structures of their scores. After Daredevils (february 1979) with guitarist Henry Kaiser, and the transitional This This This This (august 1979), with Raskin's eleven-minute Flamingo Horizons, Invisible Frames (october 1981) boasted another peak of their expressionist art, Voigt's 22-minute Narrow Are the Vessels. Ochs' 19-minute Paint Another Take of the Shootpop, off As Was (april 1981), was dedicated to both classical composer Olivier Messiaen and soul vocalist Otis Redding. Rova's style was becoming more accessible while still being abstract, absurd and atonal. After the live double-LP Saxophone Diplomacy (june 1983), with a 24-minute Detente or Detroit, and the Steve Lacy tribute of Favorite Street (november 1983), the Rova Saxophone Quartet sculpted the titanic jams of Crowd (june 1985), such as the 19-minute The Crowd, Ochs' 29-minute Knife In the Times and Raskin's 16-minute Terrains. After the relatively straightforward Beat Kennel (april 1987), and the live The Aggregate (july 1988) with fifth saxophonist Anthony Braxton, Voigt left Rova and was replaced by Steve Adams for Long on Logic (january 1990).

In 1986, Ochs had formed the Group Room, a trio of saxophone, piano and electronics. In 1990 he and keyboardist Wayne Horvitz formed the International Creative Music Orchestra.

After Electric Rags II (september 1989) with electronic musician Alvin Curran, Rova's recordings became more predictable and focused on live performances: This Time We Are Both (november 1989), with a 26-minute The Unquestioned Answer, Morphological Echo (december 1989), From the Bureau of Both (september 1992), with the 18-minute The Floater.