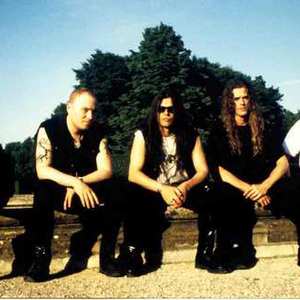 Rough Silk are a German power metal band, formed in 1989 and they have released seven studio and one best of album so far in their history. During 20 years of their career the band has defined their very unique sound which is best described by the band name Rough Silk: "Rough" stands for the real heavy (sometimes even thrash) metal influences and "Silk" for the unusual singer-songwriter elements and piano-parts, combining both to their very own brand of heavy but yet melodic metal.

The first era contained the albums ?Rough Silk? (Vinyl LP only), ?Roots of Hate?, ?Walls of Never?, ?Circle Of Pain? and ?Mephisto? followed by a first European tour with Savatage.

The second era started with the 5th album when Barnett left the band and was replaced by Thomas Ludolphy. In this period the band recorded the albums ?Beyond the Sundown? and ?Symphony of Life? and supported Savatage in Europe once more, on Savatage's special wish. During this time Rough Silk brought out their first best of album ?Wheels of Time?.

In 2002 Ludolphy left the band due to personal reasons and the band decided that they would not look for a new singer. On the band's 7th studio album "End of Infinity", Doernberg, Hartmann and Wunderlich shared the lead-vocals. But unfortunatly it became obvious that the band members had parted minds and had no common vision on this style anymore, so this finally led to the end of the era and Rough Silk was put on ice.
In 2009 Doemberg found the fitting band members for the reincarnation of Rough Silk, and due to the 20th band anniversary now the 3rd era starts ? with ?A New Beginning?.

Circle Of Pain...OR: The Secret Lies Of Timekeeping