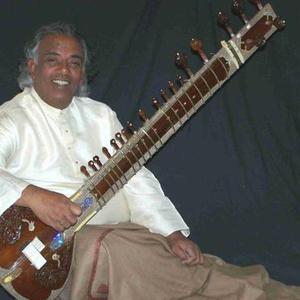 Ustad Roshan Jamal Bhartiya was born in 1952 in a family with a long musical history tracing back to the Moghul periods and connected with the Seniya tradition through Amrit Sen, the grandson of the legendary Tan Sen. Roshan's grandfather, Ustad Abdul Qadir Kahn, was a court musician in Sailana and Palampur State. A story illustrates the power of his art: ?The ruler of Waziria State, Nawab Kesar Kahn, complained that Indian music had deteriorated; he had heard that in the past here had been musicians who could achieve the supernatural with their music.

Abdul Qadir Kahn replied that such music did still exist, but that there were no listeners for it. After 40 days of meditation he gave a performance to prove this claim. The audience was spellbound. During the concert a black cobra appeared and was similarly charmed?. Roshan's father and guru is Ustad Jamaluddin Bhartiya. Jamaluddin began learning from his father. When he was sixteen, the death of Abdul Qadir Kahn brought him to Delhi, where he joined All India Radio. At the same time he started learning vocal music from the eminent vocalist Amir Kahn. One year later, Jamaluddin met Pandit Ravi Shankar. Impressed by this virtuosity and his power of expression he became his disciple. After establishing himself as a concert and a radio performer in India, Jamaluddin decided to join the efforts of his guru to spread the beauty of Indian music in the West. A tour through America and Europe in the 70's finally brought him to Amsterdam, where he established an Indian music school, Tritantri Vidyapeeth.Born in this musical atmosphere, Roshan Jamal Bhartiya started his training in Indian music at an early age under the constant guidance of his father. This has made him one of the best sitarists of his generation. Roshan Jamal Bhartiya has played extensively in India and abroad. Amongst his numerous concerts there were performances for All India Radio and television. He was chosen as a member of a cultural delegation for the promotion of the arts touring different parts of India (and neighboring countries) and he toured Europe with concerts in Germany, Switzerland, and Holland. He has also toured and lived in Israel and the United States.