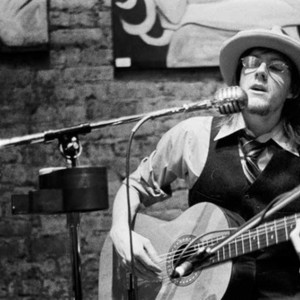 Since 2001, Andru Bemis has wandered the ends, edges and in-betweens of North America more times than he can count. His unmistakable voice, expressive self-taught styles on banjo and guitar (and occasional fiddle or banjo-ukulele), engaging stage presence, and exquisitely crafted tunes of travel and longing have earned Bemis rapid respect and a dedicated following throughout Mexico, Canada, the U.S., and beyond.

Andru's preferred mode of transport is Amtrak passenger trains, on which he has spent many months, performing almost nightly in cities and towns along the way. When no train is available, Bemis wends his path by foot, thumb, bicycle, bus, subway, ski and occasional aeroplane.

The songs of Andru Bemis are spiritually descended from an era when music was made and played to express one's deepest emotions while entertaining the neighbors. Bemis is a ?traditionalist with a fresh approach and a modern troubadour with deep respect for the roots of his craft. He is a gifted vocalist and instrumentalist. His music speaks to our present condition in language of a gentler past? (Wepecket Island Records). The Birmingham [Ala.] Weekly calls Bemis a ?modern-folk, Midwestern miracle of music ?. with a voice that is pretty and ravaged, sounding as though 50 Appalachian winters have run him ragged.?

Bemis' performances traverse the boundaries of age and culture, drawing audiences young and old, gypsies, folksies, punksies, babies, crusties, hillbillies, grannies and more. Children are known to request songs from his albums by track number, punks and rockers ask for soft tunes of unrequited love, and normally staid adults throw inhibitions aside to sing, bark and dance with folks they've only just met.

Besides having performed or toured with a good number of highly regarded bands and artists, Andru has collaborated on recordings with world traveling gypsy-punk accordianist Jason Webley, and on Rachel Ries' critically acclaimed Waterbug Records debut, For You Only, among others. Andru's three self-produced solo albums receive regular airplay on radio stations throughout North America, Europe and Australia. Rail To Reel, was called the Best Folk Album of 2006 (KDVS-FM; UC-Davis) for its unique instrumentation - including pump organ, banjo-ukulele, and tuba - and for bringing new life to a collection of lesser-known traditional songs learned and adapted by Bemis in his travels.

When he's not wandering, Andru Bemis returns to his shell - a mid-sized town on an especially large lake in southwest Michigan, where he shares his life with several thousand dusty records, a Singer sewing machine, a creaky rocking chair, and few good books.