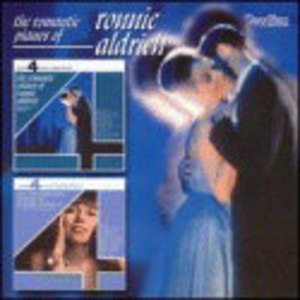 England's one-man answer to Ferrante and Teicher, Aldrich churned out a steady stream of albums featuring his "Twin Pianos" for London's Phase 4 label, starting in 1961--most of them no more distinguished than F&T's post-"prepared piano" recordings. Aldrich studied at the Guildhall School of Music in London and played and arranged for the RAF Dance Orchestra during World War Two. After the war, he remained associated with the group as it mutated into "The Squadronaires" and became one of the most popular groups in England.

Aldrich eventually became the band's leader and conductor, and stayed in that role until the group dissolved in 1964. He also worked as musical director for Thames Television.

Aldrich's albums are usually pretty lame--er, tame--but if you haven't heard one, it's worth spending up to three bucks to own your own little bit of authentic 60s experience. Not the Haight-Ashbury-Woodstock-Jimi Hendrix kind of experience, but the experience most people had. Put on Ronnie's take on "Music to Watch Girls By" and you can imagine yourself strolling down the aisle at the A&P or shopping for school clothes at J.C. Penney. Or riding an elevator to your dad's office. Or waiting at the Omaha Airport. Who needs Eastern philosophy to get blissed out?