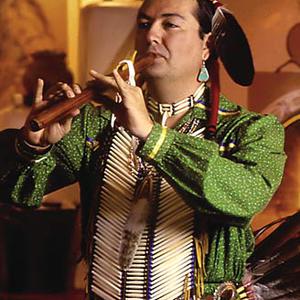 Ronald Roybal (HwAn-Pi-Khaw ... Red Tailed Hawk Song) is a native of the American Southwest and a renowned flutist who performs songs inspired by the region and its peoples. A descendent of Pueblo (Tewa) and Spanish Colonial peoples, he considers his ability to express both sides of his heritage to be a great gift and responsibility. A completely self-taught musician, Ronald has studied music since his youth and is widely respected as a master performer of the native american flute as well as the spanish style classical guitar.

In addition to guitar and flute, he enjoys pow wow singing and dancing.

Ronald has been featured twice on National Public Radio's Performance Today program for his performance at the Santa Fe Chamber Music Festival's Salute to Indian Art Market. His music has been included in various video soundtracks including "The Trail of the Painted Ponies", "Spanish Missions: Magnificent Restorations", "Zozobra", "Land, Water, People, Time" and "The Blood Cries Out".

He makes his home in Santa Fe, New Mexico where he performs extensively at area hotels, resorts, restaurants and civic events. In addition to performance, Ronald successfully operates his own recording studio and record label.

Visions of the Fourth World