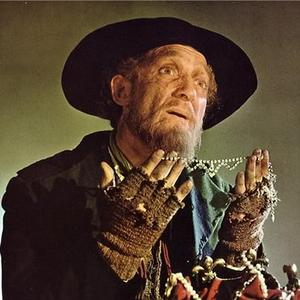 Equipped with a crooked, leering smirk and devilish gleam in his eye, the homely, yet beautifully expressive mug of actor Ron Moody will be most assuredly remembered for one signature role, despite the fact that the talented comedian had much, much more to offer. Carol Channing may have had her Dolly Levi and Yul Brynner his King of Siam, but Moody would become the most delightfully engaging musical villain of all time.

The son of a plasterer born in London in 1924, he never gave much of a look at pursuing the acting field until age 29. Prior to that he had only entertained thoughts of becoming an economist or sociologist (trained at the London School of Economics). On his way to becoming a top stand-up and improv revue artist in England (from 1952), he made an inauspicious film bow in 1957 in an unbilled bit. It was the British musical stage that offered him his first taste of stardom with the London company of Leonard Bernstein's "Candide" in 1959. It was not a great success, however, but it did lead to the role of a lifetime the following year as Fagin, the loveable, rapscallious pickpocket in the musical version of "Oliver Twist" simply called Oliver!. He later bandied about in other roguish roles too in such TV series as "The Avengers" (1961). In 1968, Ron transferred the Dickensian thief to film, Oliver! (1968), and stole a well-deserved Oscar nomination as well, not to mention major Hollywood interest. His portrayal of Uriah Heep in a TV version of Charles Dickens's David Copperfield (1969) (TV) was also a great success. He went on to play other more contemporary roles, both straight and sharply comic, but Fagin would be his lasting claim to fame.

Santa's Coming In A Cadillac