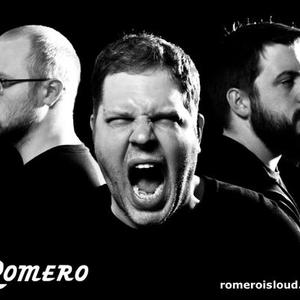 Romero's Jeffrey Mundt spent most of the 90's behind the drum kit for a variety of bands including Bovine Records' THUG & punk legends, NAKED AGGRESSION. A long-time guitar player & songwriter, he often dabbled with fronting a band, but never pursued it seriously. Enter: a move to northern WI, a random Craigslist ad, a casual writing and recording session (with Mundt handling vocals, guitar & drums!) & Romero was born! Rumors of the project peaked the interest of PONEY drummer & vocalist Ben Brooks, he volunteered and was quickly hired.

October 2010 brought the band's first release, the 7" vinyl record "Solitaire". Released independently on Triceratrax Records, the single received rave reviews from all over the world. In February of 2011, the single was re-released online by GRINDCORE KARAOKE, a label headed by J. Randall from RELAPSE Records' Agoraphobic Nosebleed. To date, the single has been downloaded over 10,000 times and has been purchased, shared and traded by thousands more via online music blogs & retailers.

With many local and regional shows under their belts, ROMERO took the show nation-wide as they completed their first national tour in spring of 2011. They have recently shared the stage with the likes of The Sword, Jucifer, Weedeater, Clutch, Dead Meadow, Black Label Society and other dyed-in-the-wool heavyweights.

2012 brings the addition of bass player Steve Stanczyk to replace original bass player, Josh Stanchik. Yeah, the name thing is weird, isn't it? On 4/20/12, the single "Couch Lock" was released online via GRINDCORE KARAOKE as well as on a limited edition cassette. The packaging for this release features unique 3D artwork and includes 3D glasses.

The band is currently finishing an LP to be released in fall of 2012 and intends to continue to tour until the wheels fall off.