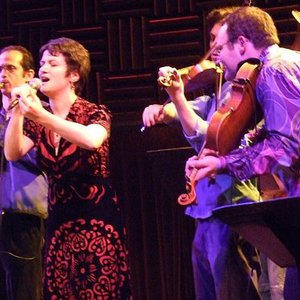 Romashka plays Gypsy music from Russia, Romania, and beyond. Lithuanian-born singer Inna Barmash fronts a band of multifaceted American musicians and one half-Romanian-half-Japanese madcap accordionist, who bring years of Klezmer, jazz and rock experience to their Gypsy music journey. See Romashka's website at http://www.romashka.net for full info. Based in New York, the band was born in fits and torrents in the fall of 2003.

Based in New York, the band was born in fits and torrents in the fall of 2003. Roaming from cafes and all-night jams, to apartment parties and subway stops, the band quickly catapulted to pulsating clubs and underground parties, drawing a loyal - and swiftly growing - following from downtown party revelers and outer-borough-dwelling ethnic communities alike. A driving force in the burgeoning New York gypsy and Balkan music scene, Romashka has held monthly dance parties at the infamous Mehanata (the Bulgarian Bar) and Maia Meyhane, and has also performed at the legendary Knitting Factory, the BAM Caf?, the Philadelphia Museum of Art and numerous outdoor festivals in the region.

Roma is the Gypsy word for the Gypsy people. The complex rhythms and odd harmonics in Gypsy music are enough to enthrall musicologists, but to understand it, all you need are ears, a heart, and? a soul. Romashka draws its repertoire primarily from Romanian and Russian Gypsies ? with hints from Spain, Turkey and beyond. The musicians have traipsed around Eastern Europe and the Eastern European enclaves of NYC collecting and imbibing local folk music and culture.

Mashke is Yiddish for ?liquor.? This is party music that burns in the belly. Romashka has roused crowds from BAM Caf? to the Bulgarian Bar, from weddings to late-night house parties that have shaken the walls and drawn the cops. ?If you really want a challenge, try sitting still while Romashka plays!? (Michael Ginsburg, Zlatne Uste Balkan Brass Band).

Romashka is Russian for ?daisy.? Next to raucous dance numbers you will also find aching, world-weary love songs, as sweet and unexpected as a flower in a parking lot.

Romashka detonated its signature Gypsy bacchanalia into its debut album. Count down for music with deep roots and fierce vitality, showcasing both technique and attitude, pulsing between seventh heaven and the nine circles of hell.