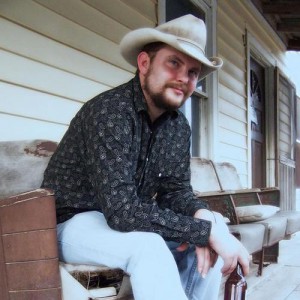 In his 1985 hit, George Jones sang, "Who's Gonna Fill Their Shoes?" The song wondered where we might find the next generation of real country singers. Hearing that song at age 5, Rodney Hayden of Pleasanton, Texas probably didn't think that he'd be trying on those shoes one day. Hayden's first album, The Real Thing, came out in 2001 and it only took one listen to realize that the world had been introduced to the perfect stone-country singer in the tradition of Haggard and Jones.

Hayden's first album, The Real Thing, came out in 2001 and it only took one listen to realize that the world had been introduced to the perfect stone-country singer in the tradition of Haggard and Jones. A collection of seven original songs and four dead-solid covers, The Real Thing was a strong debut that left fans of COUNTRY MUSIC hungry for more. It is here. Hayden's second album, Living the Good Life, was released in 2003 on the Audium/Koch label. Keeping the promises made on his first album, he offers up another stunning collection of songs. Eight new originals, co-written with Bill Whitbeck, run the emotional gamut from the honky-tonk fun of the first single, "Trying to Get a Little Love," to the heartbreak of "The First Day." "Goodbye to My Hometown" is the timeless story of a young man leaving home to find his place in the world. The achingly beautiful "Mr. Mockingbird" is an instant classic.

A cast of great musicians came together under the masterful guidance of producer Rich Brotherton to make an album that is spellbinding. A core group of musicians, including Brotherton himself on guitars and vocals, was joined by some very special pickers. Guitarist Redd Volkaert, of Merle Haggard's Strangers, lit a fire on several tracks. Veteran of Johnny Cash's band and thousands of sessions, Earl Poole Ball turned the studio into a roadhouse with his rockin' piano. Bluegrass legend Mike Auldridge is featured on one song and David Grissom (John Mellencamp, Dixie Chicks) is simply one of the best guitarists around.

Rodney Hayden, at twenty-three, has a depth and maturity in his voice that is startling. It's warm and comforting and makes you feel good. He's making music for those of us who love real country. Who's gonna fill their shoes? Hayden is. Join him in Living the Good Life.