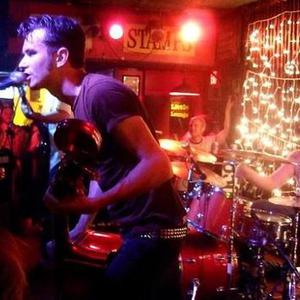 When music lovers indulge in Rocket 350's Elvis-tinged swagger, they are greeted by the combination of high-speed, rockabilly rock 'n' roll and a deep southern feel. Raised on a diet of Eddie Cochran, Gene Vincent and Johnny Burnette records, Rocket 350 keeps the music traditional, while cranking out a hard-rocking twist of its own. With its blend of four-on-the-floor drums, break-neck slap bass and scorching guitar, Rocket 350 plays rock 'n' roll the way it was meant to be played.

Formed in 1997 and formally located in Athens, Georgia, Rocket 350 now lives and breathes in Atlanta, Georgia, where the members can be found rocking out at the Star Bar or the Echo Lounge. Phil "350" Stair -- the front man and guitar slinger -- leads the band, with Gary "Grease Monkey" Bernie on upright bass and Adam "The Admiral" Gilbert on drums.

Rocket 350 has headlined four U.S. tours and produced two national releases in conjunction with Beatville records. Both records -- "[album]American Grease[/album]" and "[album]Junglebilly[/album]" -- have received airtime on radio stations across the country and raised the interest of members of the press throughout the nation. Rocket 350 has also had the privilege to share the stage with such legends as Dick Dale, Reverend Horton Heat and the Stray Cats' Lee Rocker. In addition, it has supported many national acts, such as The Amazing Crowns, The Kings of Nuthin', Hillbilly Hellcats and Hi Fi And The Roadburners.