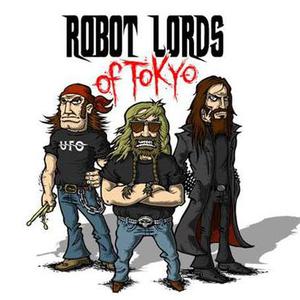 The origins of the Robot Lords of Tokyo* can be traced back to the Columbus-based hard rock band Green Sky Grey, who independently released three albums between 1999 and 2003 and gigged extensively throughout the Midwest. Shortly after the group's demise in 2004, drummer Rick Ritzler and guitarist Brad Stemple began to get together to jam on the classic metal tunes they grew up with. After several weeks of cranking out classics from Dio, Motley Crue, Motorhead, Ozzy, AC/DC...

The first phone call was made to longtime friend and former Green Sky Grey lead singer Paul Jones. As the three began to gather to work out their chosen cover songs, it was inevitable that ideas for original material would start to emerge. Combining the fact that all three play guitar, have home studios, and are on a lifelong quest to write the Ultimate Metal Riff, an intense game of "heavier than thou" quickly ensued. The resulting songs represented elements of the trio's diverse influences, including Black Sabbath, Trouble, Down, Iron Maiden, King's X, Corrosion of Conformity and Motley Crue, among many others. The project had taken a left turn and the all-covers idea was scrapped for a hybrid record consisting of these newly minted originals sprinkled with rock-hard gems from Motorhead, UFO, and Motley Crue. Thus, the Robot Lords of Tokyo were born.

The resulting album is a truly collaborative effort, benefiting immensely from the time and talents of some of Ohio's most outstanding players. Standing proudly at the top of that list is Fall of Man guitarist Joe Viers, who is also a top recording engineer/producer in Ohio. In addition to his engineering/producing/mixing/mastering duties, Joe laid down all the thunderous bass guitar on the CD, truly going above and beyond the call of duty. Another key participant and Robot Lord for life is Beau VanBibber, lead throat for thrash-masters Deflagration. Beau's unique talents and uncompromising delivery were so brutal, he was quickly elevated from guest vocalist on "Iron Fist" and "Knock Em Dead Kid", to a vital component of almost all the originals. Respect!

Finally, four shit-hot guitar slinging friends of ours provided some truly blistering leads that took each track to a new level. Hails and horns in the air to Keith Sparks, Vince Lazzaro, Terry Adams of Throttle Z, and American Dog's six-string assassin Steve Theado. (If you haven't yet experienced American Dog's bone-rattling mash up of Motorhead and ZZ Top, stop what you are doing immediately and GO BUY THEIR ALBUMS ? you'll thank me later.)

*Ok, about the name ? the story is actually pretty simple: Hardcore fans of groove-metal legends Clutch will recognize the name as a snippet from the lyrics to "10001110101", a track off their 2005 classic Robot Hive/Exodus. Neil Fallon's a genius lyricist and his band are a huge influence, so it seemed like a fitting tribute. As a bizarre aside, it also struck me that an inordinate number of classic metal live albums were recorded in Japan. Think about it: Priest's "Unleashed in the East", Purple's "Made in Japan", Scorpions' "Tokyo Tapes", and all those "at Budokan" albums from Ozzy, Dream Theater, Michael Schenker Group, and Cheap Trick. Weird but true.