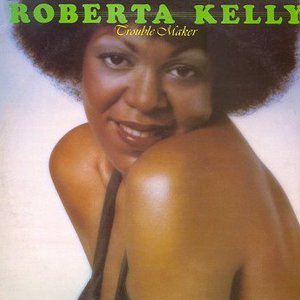 Roberta Kelly (born on November 23, 1942) is an African American singer-songwriter. She scored her largest hits with the songs "Love Power", "Trouble-Maker," (spent two weeks at #1 on the Hot Dance Club Songs chart), "Zodiacs", "Love Sign", "Funky Stardust", and a Disco version of "My Sweet Lord" which peaked at #9 on the Hot Dance Club Songs chart. Prior to releases in the U.S. through composer Giorgio Moroder's Oasis record label, Kelly recorded, during the 1970s, a single in Germany entitled "Kung Fu Is Back Again", released on Atlantic and produced by songwriter/producer Pete Bellotte.

Her debut album "This is Roberta Kelly" was released in 1975.
The album, which featured "Trouble Maker", also incuded the first known cover version of "Love Power", which was later made famous as a part of Luther Vandross' repertoire. The original version of the song was recorded in 1967.

Zodiacs (1977)?the controversial album that Casablanca Records, during the disco heyday, refused to release. Imports from Italy swamped the international dance floors, creating a blockbuster hit in the title track and songs such as "Love Sign". Many feel this album was the warm-up to the Moroder/Bellotte team dabbling with retro flavors, as the precursor to Donna Summer's "I Remember Yesterday".

Getting The Spirit (1978)?one of the first disco records to be a complete album of gospel songs, which followed Kelly's commitment to becoming a Christian. It has long been rumoured that is was Kelly who led Oasis label-mate Donna Summer to becoming a "born again" Christian as well. This album featured a dance version of "Oh Happy Day" and cult dance track "In My Father's House".

Tell Me (1981) This album was her final release during the 1980s. Includes the single "Patty Cake/Making It To The Top."
hereafter, Kelly released another album through Baby Records in Italy, featuring "Pata Pata" as a single.

Over a decade later she reappeared with a Gospel album titled "Sound Of Colour" released in 1995. In 2008, Kelly released the single "America (The Sound of Colour Realized)" to comemorate, celebrate and honour the election of American's first Africian American president. Kelly is still active in music. Her most recent album release is titled "Velvet Rose."

AMERICA (The Sound Of Colour Realized)