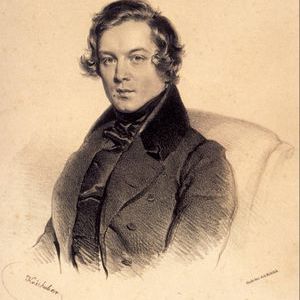 Born in 1810 in Zwickau, Robert Schumann was a German romantic Composer of the 19th century. His main focus was the piano, an instrument for which he composed numerous masterworks, despite his lack of virtuosity. Starting piano lessons around the age of ten, Schumann never acquired the level of skill comparable to his contemporaries such as Fr&eacute;d&eacute;ric Chopin and Franz Liszt or his wife, Clara Schumann, due to an injured right hand, thought to be the result of either a syphilis treatment, or a surgery to increase the strength and reach of his fingers.

Music was also a passion that he started later in his life than most great composers. He first focused on publishing and then law, before pursuing his love of music, "Poetry vs. Prose", as he put it. Around 1840 Schumann began to venture beyond the piano and write more diversely instrumented works. He composed 4 symphonies, several concerti, hundreds of songs, as well as notable chamber music, including 3 string quartets and a piano Quintet. He died in 1856 in a mental institution 2 years after attempting suicide by leaping into the Rhine. It is still debated whether his mental breakdown was caused by syphilis or a bipolar disease. There is strong evidence on both sides of the argument.
Throughout his life Schumann was a notable music critic and writer, publishing many works. He was noted for attempting to revive the music of the 18th century, that of Johann Sebastian Bach, Joseph Haydn and Ludwig van Beethoven which had taken a back seat to the romantic "liberation" of which he himself was a large proponent. His wife Clara Schumann was talented composer and pianist as well, composing a body of works. She was in fact such a great pianist (superior to Robert) that she sometimes inspired great jealousy and anger in her husband, especially when she played his compositions. Despite his mental breakdown and jealous temper, Robert Schumann's legacy is that of one of the champion of Romantic and programmatic music. With the effort of his wife Clara and his friend Johannes Brahms, much of his work was published and promoted throughout Europe preserving him in history as one of the greats.