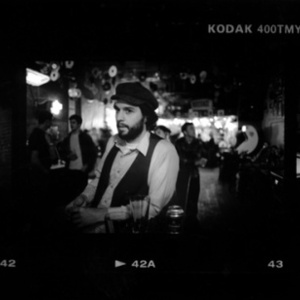 Blake has carved out a nitch and an audience all his own full of punks, hippies, college students, country music fans, tree sitters, high schools and their parents. You're bound to hear some Dylan, some Billy Bragg, some John Darinelle, and something Irish, but mostly you're going to hear Robert Blake. Blake's musical and spiritual roots are in being a folksinger. He unashamedly draws from folk sources and at the same time brings a careful modern appraisal to the process.

Blake's musical and spiritual roots are in being a folksinger. He unashamedly draws from folk sources and at the same time brings a careful modern appraisal to the process. What sets Blake apart from other songwriters is his ability to approach familiar strains with his speed strumming guitar style, wry humor, and superior narrative sense and sensibility. His songs hold up when standing next to the best of Richard Thompson and Greg Brown. 30 years their junior, Blake is bringing the folk song to a new place and to a newer, younger audience.

Since 1997 Blake has been touring nationally both out of Bellingham, WA and Philadelphia, PA. He's performed at prestigious folk venues such as The Tin Angel in Philadelphia and the Tractor Tavern in Seattle. He's also performed at punk venues such as The Gilman St. Theatre in Berkeley and the A-zone in Chicago. At home in Bellingham, Blake headlines at the Annual Subdued Stringband Jamboree drawing upwards of 1000 people. In addition, and close to Blake's heart, are the impromptu venues he's played from coast to coast- backyards, living rooms, Ethiopian restaurants, and alleys have all been home to Blake's songs. He's shared the stage with Mary Lou Lord, Danny Barnes, Erin McKeown , Sweep the Leg Johnny, The Murder City Devils, The Posies, Pete Krebs, Dave Mathews, and others. And once, he delivered a table to Greg Browns door!

In 1997 Blake started his own record label Same Room Records that aims to make recordings of people making music in the same room at the same time -- an oddly original idea amidst our current era of mulitraking perfection. His 4 full-length recordings have shown the various sides of his writing. From the folkswingblues of The High, Wide, and Handsome Band "as usual the party's in the kitchen and the hall" to the whisky-folk of Humdinger Days and Humdinger Nights "The Hotel sings of badly told lies, backdoor exits, alibis, rotten faces, broken dreams, screaming nightmares, spoiled sweet dreams" to the romantic breakdown of A Crowd of Drunken Lovers "these girls get bored by nice boring guys who have jobs and ex girlfriends who went with them on family vacations." Blake has continued to make quality recordings which are played regularly on college radio stations, bedroom stereos and living room turntables coast to coast.