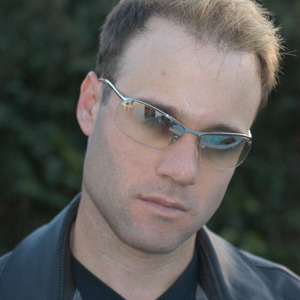 BIOGRAPHY Dynamic! Energetic! Edgy. An artist influenced by dark synth-pop bands like Depeche Mode, The Cure, and New Order. These are just a few of the words being used to describe Los Angeles electro-pop/dance recording Rob E C. In 2006, he released two albums of original material full of infectious electronic pop and dance songs (The Voices Inside and Deliverance). He also put out a remix album full of his earlier songs remixed by talented deejays and producers from all over the world.

This promises to be a breakthrough year for the former Connecticut dee-jay as Rob E C will be releasing a new album full new material sometime in Nov. 2009. ?The Voices Inside? features two versions of the hit single ?Right Here Waiting? which hit #3 on the Billboard Breakout Chart. It also includes the original version of ?Heaven?, his second single, which was heavily played at Abercrombie and Fitch stores and satellite dance radio stations throughout the country. The album also has outstanding pop songs like ?Give It Up?, featuring rap vocals by rapper Knotty, ?Her Way?, and the heart-tugging ballad ?Never Leave You Again,? which reached #6 on the American Idol.com underground pop chart.
The second album, Deliverance, is more dance oriented and high energy and is a must have album for lovers of dance, electro-pop, and trance. Outstanding tracks include a new version of his previous single ?Heaven? and an incredibly powerful ballad ?Wishing You Were Here. Other outstanding tracks include ?Listen To Your Heart,? of which there are several great remixes, ?You Can Try? and the very personal ?Save Myself?.

Originally from Connecticut, Rob began studying piano and writing songs at the age of ten. He later attended SUNY Purchase College in New York and was enrolled in their acclaimed music studio composition program. After graduating with a Bachelor of Arts degree in music composition he relocated to Los Angeles in 1997 and formed a mobile deejay company called ?Uptown Sounds? and spun music at various events like weddings, birthdays, and private parties. Not content with just deejaying, he started working on songs for his first two albums with supremely talented producer Phillie G. When the first two albums were completed, he contacted some of Europe's talented crop of up and coming producers and deejays to do club remixes for the third album ?The Remixes?. In September 2006 all three albums were made available on I-tunes, cdbaby.com and all other online digital stores.

Rob E C is currently in the studio on his third original album, which will be out in Nov. 2009. There is a video for one the tracks called ?Contemplate? which can be see on websites such as youtube.com. Another track called ?My Only? is now available to download or buy on i-tunes, cdbaby.com, etc. Recently his song ?Wishing You Were Here? (Hearts Collide) from the album Deliverance was heard in the feature film ?Adventureland? starring Kristen Stewart. There is also a video for the track on youtube.com, myspace.com, etc. On Oct. 19th, 2009 at the request of 2009 Grammy nominated producer Arnold G, Rob E C performed at the ?Hand In Hand? fundraiser at Rage Nightclub in West Hollywood, CA to raise money for the devastation in the Philippines caused by a typhoon that killed over 700 people. For more information and upcoming live show dates, please visit www.robec.net or www.myspace.com/robec.

My Only (cd single)

Listen To Your Heart (cd maxi-single)

Give It Up (Explicit)