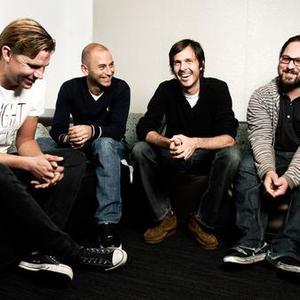 Rival Schools is a Post Hardcore band from New York, United States that was formed in 1999 by members from several influential 80's and 90's hardcore bands (including Gorilla Biscuits, Quicksand, CIV, Youth of Today, Burn, Project X, Judge, Moondog, Warzone, Side By Side and ICEBURN). The band started from the ashes of a short lived project, World's Fastest Car which had Artie Shepard of Mind Over Matter and Bad Trip fame involved, but the project went no further than demos. Apparently Walter and Artie had a difference of opinions hence the split. Artie then started Errortype: 11.

The band decided to start a series of EPs where multiple groups form a single band and they looked to Jonah Matranga formerly of Far, New End Original and Gratitude. The lone result was titled Rival Schools United by Onelinedrawing, released on 24th July 2001. Their full-length album titled United By Fate was released on 28th August the same year on Island Records. Shortly after the release of United By Fate, the band released their first single, Used for Glue. The second single released from the album was Good Things. Both releases enjoyed heavy rotation on MTV, both in the US and UK.

Ian Love left the band in 2002, and played as part of an Experimental-Rock band named Cardia, releasing an eponymous album in 2003.

A second album was expected for spring/summer 2003, but it did not surface. However, the master tapes of the album were leaked onto the internet, comprised of eleven tracks:

Sammy Siegler joined Nightmare Of You and briefly provided percussion for Limp Bizkit.

The band reformed for shows in Summer 2008 and a new album is expected.

The band was originally named Rival Schools United by Fate, after a video game, but due to legal reasons had to change their name to just Rival Schools.