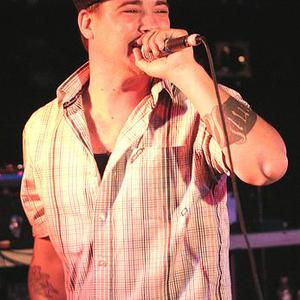 Rite Hook stands as a Hip Hop icon in a world where no sunshine exists. Hallow and ominous, his choruses seduce listeners, tempting them to fall prey to his melodies like the sweet addictions he raps about. Like the biblical serpent tattooed on his left hand, Hook is asking you to bite the forbidden apple in every song. He raps with the same kind of darkness that obsession is born out of and the temptation to pick the scab until it bleeds.

"I started writing lyrics at 11 or 12 years old - not even signing them that much, just writing," Hook said, "There was a lot of darkness there." Channeled into sound, the effect is devastating. At times as soothing as a horse tranquilizer to the dome, his voice rasping a bleak lullaby - at times as frantic as a fiend desperate for his next fix. Boston Phoenix hip hop writer Chris Faraone described Hook's style: "Every word that Rite Hook rips rings with utter disgust; he doesn't speak words so much as fire them into an imaginary spittoon. "Hook turned heads early in his career when he caught the attention of Boston's largest hip hop promotion and production company, Leedz Edutainment, CEO Ned Wellbery.

"It was his hooks, they got stuck in my head," Wellbery said. "The songs were mixed together like crap but I could tell there was raw talent there."

Raw talent that Hook began cultivating at a young age, not only in his music, but in other art forms as well. Drawing and painting at the age of four, Hook said he abstracts from reality, contorting the people in his life and distilling their form on any type of canvas he can find.

"Everything in my artwork is fictional but it usually turns out looking like someone I'm involved with in my life." Hook said.

"In 2004 I really started getting serious about music," Hook said. "I found places to record wherever I could, luckily I found some dope set ups right off the bat". While he never made it as a painter, the same abstract-turned-autobiographical impulse in his drawings comes out strongly in his lyrics. Themes of drug abuse and violence reoccur, a constant reminder of his ongoing battle with the demons within.

Hook is working and producing music fulltime. "Draw You In" OUT NOW for FREE DOWNLOAD HERE: http://leedzedutainment.bandcamp.com/album/draw-you-in

"I'm incorporating sound as well as art, stepping out of my box, and my singing has grown to a whole new level," Hook said. "Im speaking to people in a new way"
More structured than previous albums, Draw You In offers listeners an inside look into the life of an artist honing in on a distinct and intoxicating sound. It's an anthem for any screwed up kid with no place to go but inside a bottle, for outcasts and outsiders, for anyone who's ever felt alienated by the college-happy jockeys auto-tuning their way to stardom, and for anybody who's ever had to struggle at one time or another. In short, it's an anthem for the underbelly of America.