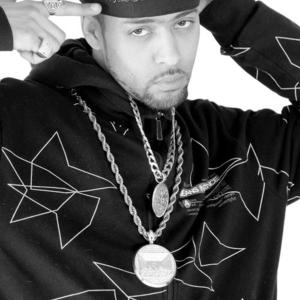 At around the age of seven Rising discovered the art of break-dancing and Body Popping and through this medium his love of Hip Hop was born. He got into the scene in a big way and started to build up his catalogue of music. Some of his favourite Hip Hop artists of all time are Big Daddy Kane, Biz Markie, Run D.M.C, The Beastie Boys, Public Enemy, Tupac Shakur, Nas, N.W.A, Dr Dre, Jay-Z, Kool Keith, and Redman. Some of these are the artists Rising drew his influence from when he first started writing rhymes in the early 90's.

Some of his favourite Hip Hop artists of all time are Big Daddy Kane, Biz Markie, Run D.M.C, The Beastie Boys, Public Enemy, Tupac Shakur, Nas, N.W.A, Dr Dre, Jay-Z, Kool Keith, and Redman. Some of these are the artists Rising drew his influence from when he first started writing rhymes in the early 90's.

In 1994 he formed his first group ?Da Kabianz? (pronounced kay-bee-ans) with two friends, one of which was a young, very talented rapper called KMC. Kabian was a word KMC made up which he felt described our ethnic origin and gave us an identity, it means half Caucasian, half Nubian. The name stuck and the trio became regulars at WKD's ?Poetry Jam? in Camden town where they would rap over music provided by the resident band and gained recognition for their skills. After a bad management deal, ?Da Kabianz? split in 1995.

Rising got his first real taste of the game in 1996 when he was able to cut his gums on a DJ Phusion Mixtape project called ?The Phusion Philes Vol.1? which they promoted in the UK and the US for two years. It was from this project that Rising put the crew P.G.M (A Phu Good Men) together. The crew consisted of himself, 10 Faces and The Phantom. Rising later drafted a young Reveal and Doc Brown into the group, for all members it was their first taste of major exposure.

Their first release was in September 1999 it was an E.P. called ?The Truth Is Right Here'. The release was big on the underground and P.G.M reached No.1 in the underground Hip-Hop chart. They also made it into the top ten in Echoes Magazine and received rave reviews in several others. To celebrate the release, P.G.M hosted a Launch party for their newly formed Record Label ?Undisclosed Records? (which was owned by Rising Son and Dj Phusion) at Scala, Kings Cross in London, which was attended by over 1100 people. This was followed by a second release two months later called ?The Key? (12?), which sold all 500 copies within a month. However due to creative differences the group split in 2000 and all members have gone their separate ways.

Rising is no stranger to working with big names and has collaborated with the Outsidaz and toured Paris with ?Cannibal Ox? and Old Skool Legend ?Edo G? in 2002. He then went on to perform at the Glasonbury festival in 2004 alongside Glastonbury based group D.B.D. They performed on the Glade stage on the first day of the festival and gave a memorable performance. It wasn't long after this that the opportunity of a lifetime finally arose.

In October 2004 he entered and won the Sony Records ?Rhyme with Nas' competition and got the chance to record with one of his Idols. He was hand picked by Nas himself to feature on the Remix of his track ?Thief's Theme? which was to be included on the UK release of his ?Streets Disciple? double album which is now multi platinum. Then in March 2005 Rising Son joined Nas, Dizzee Rascal and Kano on the UK leg of the ?Streets Disciple Tour? playing to packed venues across the UK including Bristol Academy and Brixton Academy.

Rising found himself at the centre of controversy in the summer of 2005 when he verbally attacked US artist ?Common? over his comments about mixed race relationships. The track ?Dear Common? (which also featured Doc Brown & Yungun) even received daytime radio play on BBC 1Xtra on the Nesha Show and was also the topic of debate on a special show on 1Xtra called ?UK Scandal? and received mixed responses, most of which were supportive. Rising's lyrics to the song have also been archived by the ?British Centre for Political Song? where they can be studied by its students and become the subject of their critique. The track can be found on Rising Son's last release, a free Mixtape called ?Hoodstarr: The Gift-Tape? which received a three star rating and a good review in HHC (Hip-Hop Connection) magazine, which for an independent artist is very rare for that particular publication. He also has a video on rotation on Channel U ?Rising's Theme? which you can also see here, but it's better on the big screen!

He has now formed his own independent record label called ?KMC Records? to release his music through and is set to make waves in the game once again. Rising plans to release another Mixtape and then his full length album in 2007. He also wants to concentrate on his Production Company ?KMC Productions? which is to be an artist development camp. He plans to develop artists who he feels have potential and offer them a chance to make a career in music. He is currently hard at work recording tracks for his forthcoming Mixtape ?Hoodstarr 2: Blood, Sweat & Beers!? and is planning a trip to the US to test the waters as he plans to promote his forthcoming album over there. Rising's Mixtape ?Hoodstarr: The Gift-Tape? is available now as a free download from www.kmcrecords.com