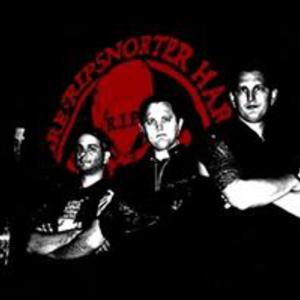 R!PSNORTER has been playing some intensely fast, aggressive and energized music since 1994. In a word, it's hardcore. It can be described as a blend of the band's roots in punk rock, its evolution to classic old school eighties-style hardcore infused with genres ranging from metal and industrial to rockabilly. The end result is some time-enduring hardcore and hardcore-hybrid music. This band does not stick to one overall formula for music.

This band does not stick to one overall formula for music. Encompassing the variety of music genres and styles is what keeps the songs fresh and at times, unexpected. The members write songs ranging over a broad base of style and content. The subject matter is as diverse as their individual and collective interests and beliefs. Some songs cary messages, others are written simply for the hell of it. One song may carry a statement on society or about the human psyche, and the next would deal with dead things eating brains. This diversity keeps the members challenged and keeps crowds interested in what's coming next. It also has mass appeal to different audiences.

Wiping Out the Human Race