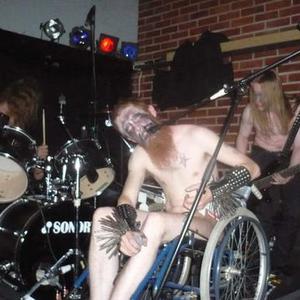 Ride For Revenge is a 2-piece black metal band originally from Lappeenranta, Finland but now the band is located at Helsinki. They are Harald Mentor (drums & other instruments) and Spirit Krusher (Bass). Being so bass oriented and doomy in speed and atmosphere, they have few contemporaries in black metal circles, however they are still sonically BM and have a tone and pace reminiscent of bands like Beherit, Archgoat or Torturium with whom they have released a split 10" in 2006. In 2008 they released a collaboration with Finnish noise artist Bizarre Uproar

The King of Snakes LP