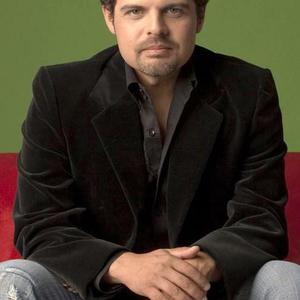 He is the hottest thing going on in Austin, Texas. Ricardo Trevi?o, Jr. (born May 16, 1971 in Houston, Texas), known professionally as Rick Trevino, is an American country music artist of Mexican American descent. Signed to Columbia Records in 1993, Trevino began his career that year with the release of his debut single, "Just Enough Rope", the first mainstream country music single to feature separate English and Spanish-language versions.

Ricardo Trevi?o, Jr. (born May 16, 1971 in Houston, Texas), known professionally as Rick Trevino, is an American country music artist of Mexican American descent. Signed to Columbia Records in 1993, Trevino began his career that year with the release of his debut single, "Just Enough Rope", the first mainstream country music single to feature separate English and Spanish-language versions. The song was included on his debut album Dos Mundos; a self-titled album followed a year later. Trevino has charted a total of fourteen singles on the Billboard Hot Country Songs charts, and recorded seven studio albums. His highest-charting single, "Running Out of Reasons to Run", spent one week at Number One in 1997.
Trevino is the son of Ricardo Trevino, Sr., a Tejano musician, and Linda Chavez. His music career began when he started taking piano lessons at the age of five. He plays rhythm guitar as well as keyboards.
Although he was offered a baseball scholarship to Memphis State University, Trevino chose instead to study music at Texas A&M University. While a student, he played his brand of country music in local clubs. In 1991, a representative of the Sony label was stranded in Austin due to flooding conditions and visited a small club where Trevino regularly played. Although Trevino was not performing that evening, the representative saw several articles on the walls which praised Trevino. Employees of the club gave him a tape of Trevino's music, which the label representative then passed onto music producer Steve Buckingham. Buckingham made a special trip to Austin just to hear Trevino perform and signed him immediately to Sony. Trevino left school to pursue his music career.
At the insistence of Columbia Records, his first album, Dos Mundos was an almost entirely Spanish country album. Trevino, who is not a native Spanish speaker and needed lessons before he could record the album, was displeased with the decision. "I didn't like that a bit because I didn't want people to think I was a Tejano artist...Everybody thinks I'm a Tejano singer crossing over to the country format." The album was certified gold. Seven months later, in 1994, Sony released his first English album, Rick Trevino. Rick Trevino was certified gold (selling over 500,000 copies) and featured two Number One hits, "She Can't Say I Didn't Cry" and "Doctor Time." His debut single, "Just Enough Rope" ("Bastante Cord?n"), appeared in English on Rick Trevino and in Spanish on Dos Mundos, while a version of the song which combined the two languages was also released to radio. This became the first mainstream country single to be released in both English and Spanish. The album's third single, "She Can't Say I Didn't Cry", became Trevino's first chart-topper, spending one week at the top of the Gavin Report country singles charts.
The follow-up English album, Looking for the Light, was released in 1995 and included the top-ten hit "Bobbie Ann Mason." Trevino also recorded a Spanish version of the album, titled Un Rayo de Luz ("A Ray of Light").
In the late 1990s he joined an all-star group of Mexican-American singers, including members of Los Lobos, Freddy Fender, Ruben Ramos, and Flaco Jimenez, to create the supergoup Los Super Seven. The group won a Grammy in 1998 for Best Mexican-American Music Performance for their self-titled debut album.
Trevino's 1996 album Learning as You Go, produced his first and only Billboard Number One single in "Running Out of Reasons to Run". As with Looking for the Light, Learning As You Go also featured a separate Spanish-language version, titled Mi Vida Eres T? ("My Life Is You").
Trevino asked to leave his contract with Sony in the hopes of moving in a different musical direction. Sony refused to release him from the contract, and Trevino cut a new album and released the single "Only Lonely Me" in 1998. Before the album could be released, Sony fired Trevino, and the album was shelved. Undaunted, Trevino continued to tour and released a Spanish-language album, Mi Son, that contained only ballads and had little hint of his country music roots. Without a new album or record deal, however, Trevino's touring schedule slowed, and most of his band quit.
During this time Trevino began collaborating with Raul Malo, former frontman of country band The Mavericks. The two had met while working on the second Los Super Seven album. Their collaborations helped bring Trevino to the attention of producer Paul Worley, who helped Trevino get a contract with Warner Brothers.
For his next album, In My Dreams, Trevino "wanted to do a country record that had a Latin flavor to it." He wrote or co-wrote every song on the album except for the final track, a cover of the Bryan Adams song "Have You Ever Really Loved a Woman?" The title track, "In My Dreams" became a single and remained on the charts for twenty weeks, falling just shy of the Top 40 on the Billboard country charts (although it reached a peak of #34 on the Radio & Records country charts).

Learning As You Go

Looking For The Light