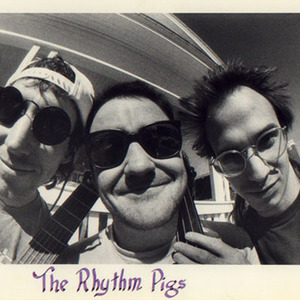 The Rhythm Pigs were a punk band, originally from El Paso, Texas, later relocated to San Francisco. Their first two albums were among the first to be released by the influential independent Mordam Records label. Their first 7" EP is a classic example of early hardcore, welding driving rock and roll with broad melodies and the varied tempos and hooks that were to disappear from the form until reintroduced by Green Day and the like.

The first two studio albums showed more "big tent" punk, with varied musical styles ("Break or we'll break your face" would not seem out of place on Licensed to Ill) happily shoehorned into melodic punk songs.

Touring extensively throughout Europe and North America throughout the mid-1980s, the Rhythm Pigs were one of the most sophisticated and musically diverse hardcore bands, and remained so throughout the 1980s as hardcore became more and more musically conservative. That the wistful and melodic power-ballads of "El Paso" would not be considered punk by most adherents has as much to do with the shifting definition of punk as it does with the mellowing of the band's sound. "Baby Falcon Getaway" saw a return to a more raw, fast-paced hard rock sound (the three out-and-out hardcore songs on "El Paso" are collected into a single track titled "The Fast Three") combined with the more humorous tone seen on the first album. "Baby Falcon..." and included a hardcore cover to the Gordon Lightfoot's classic "Sundown", a furiously paced rendition of Charles Mingus's "Boogie Stop shuffle" recalling the "Peanut's theme" (Vince Guaraldi's Linus and Lucy) from the first album.