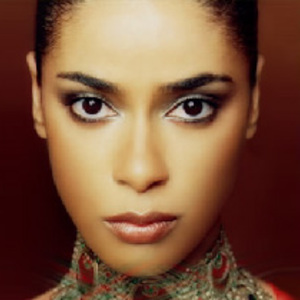 Rhian Benson is enigmatic -- enigmatic because she defies categorization; enigmatic because her life and her music are framed by paradox. Complex and cerebral, Rhian's music is simultaneously warm and soulful, empathetic and ethereal. She's been compared to a diverse range of artists, from Jill Scott to Seal to Sade; from Enya to Lauryn Hill; Dinah Washington to Dido. Rhian's music has been described as R&B, soul, jazz, reggae, hip-hop and world beat - and, to illustrate the paradox of Rhian in only one of a hundred ways -- each of those genres apply.

Rhian - born Rhiannon Afua Benson in Ghana, West Africa - grew up surrounded by music and musicians. Her mother, from Wales in Britain - is a singer, and her father, a native of Ghana , is a guitarist. Rhian's grandfather led an acclaimed big band in the '50s and '60s, her eldest uncle was a popular highlife singer - and her youngest uncle a record producer. Home for Rhian was a place of music; her childhood was immersed in the sounds of Miles Davis, Earth Wind & Fire, Ella Fitzgerald and Afrobeat legend Fela Kuti among many others.

Rhian was not meant to be a spectator, though, and her desire to become a musician coincided with a family move to India . Within weeks of arriving in New Delhi , Rhian's passion was fully ignited: she began playing the piano, and wrote her first song when she was 9. By the time she and her family returned to Ghana , Rhian was fully engrossed in the music - both listening and creating.

While music was essential to Rhian, so was education; another paradox appears when one considers that Rhian left her artistic pursuits behind to attend the prestigious London School of Economics and then Harvard, ostensibly to pursue a career in the distinctly right-brained field of banking. But while studying in Boston , life intervened: Rhian's mother had been diagnosed with a serious illness.

Rhian immediately went back to London, where her mother was undergoing intense treatment. With her family spread throughout the world, Rhian, nurturing by nature and always close to her mother, became responsible for her mother's day-to-day care. It was during that time that Rhian rediscovered music: it became a source of strength for her, helping her to get through a tremendously difficult time. As her mother began to heal physically, Rhian began to heal emotionally-- through music.

"It was a major turning point for me," Rhian says. "I couldn't ignore my deep-rooted desire to be creative and artistically expressive any longer. I came to realize that taking a risk, following your dreams and listening to your strongest instincts is the only way to become one with your spirit. One of my favorite quotes is by Paulo Coelho in his wonderful book The Alchemist. I'll never forget what he said: 'To realize one's destiny is a person's only real obligationwhen you want something, all of the universe conspires in helping you achieve it."

Although her mother's health had improved, Rhian stayed in London - once she recognized the significance of music in her life, she abandoned her plans to return to Harvard -- and began performing regularly at small venues, where she was discovered and signed.

Rhian began working on her debut album (Gold Coast) in 2001 - in addition to singing and playing various instruments, she is writing and composing all the songs, collaborating with a close-knit group of other talented musicians and producers. "I love the entire process, from writing to recording," says Rhian. "There are so many things in life that I care deeply about, and it's very fulfilling to be able to capture and share them in song. The freedom of creating music is addictive - it reminds me of growing up in West Africa , with the sea, the skies, and wide open spaces everywhere."

"These same feelings are why I feel at home in California ," Rhian continues. "I've always been drawn to America and the sense of possibility that seems to lie around life's next corner."

Say How I Feel (CDS)