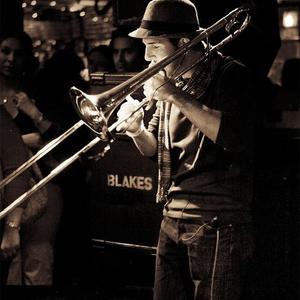 Founded in 2001 by a group of young artists and art students in Tehran, Iran, 127 Band has found itself at the center of progressive cultural change in Iran.The band's music melds Iranian melodies and jazz with an alternative sound.The band's lyrics tell of the frustrations and joys of life, somehow managing to speak of their cultural time and place, while simultaneously reflecting universal frustrations of isolation and hope. 127 is a 5 piece band -guitar,piano,trombone,bass and drums.

universal frustrations of isolation and hope.

127 is a 5 piece band -guitar,piano,trombone,bass and drums.
the group has become a lightning-rod for international media attention. Through numerous articles and broadcasts in the western media, the group's website receives thousands of hits a month from a growing international listeners.

127 has also composed the original sound-track of the French/German Television's Arte production "Emamzade Internet"- a documentary directed by Reza Haeri- with the song "Digital
Divide". A short documentary named "127, an Iranian band" (by Reza Haeri) aired by UK channel 4 of June, 2005 gained an interesting respond from British audiences, 127 was also featured in a Swedish documentary aired in January of 2005.

In addition to these television appearances, their music has reached radio around the world, and has been covered by major print media from Germany to the UK and US.
The band has been invited to perform at 2005 SXSW festival in Austin\Texas but somehow they had to miss that opportunity.

127 recently has performed couple of gigs in Italy amongst Arezzo Wave Festival on july 15th 2005 at the main stage and gained a notable attention among audiences and press.
In October 2005 performing in New York, Washington and Cambridge; 127 was the first Iranian rock band toured in United States.