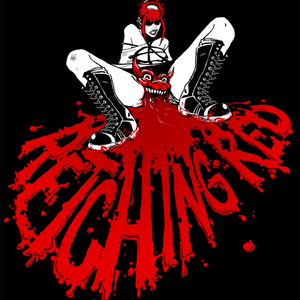 RETCHING RED is a Bay Area punk rock band that formed in August 2004. Members include vocalist Cinder Block formerly from the band Tilt, among many others since 1983. She also sang in Fabulous Diaster for a six month stint in 2003. Bassist Mike Cyco Loco also sings in Oppressed Logic and has been in bands like Angry Samoans, Strung Up, Last Round Up and many others since 1986. Adam Grant is on drums and was stolen from the band Creepy and also the current drummer in Oppressed Logic. Jake Dudley is the guitarist from Second Opinion and also plays in Oppressed Logic.

Retching Red's debut album was titled "Get Your Red Wings." Their second album "Scarlet Whore of War" is on Rodent Popsicle Records.

Get Your Red Wings