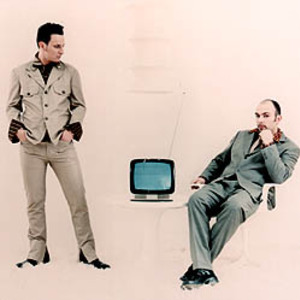 Resistance D are Maik Maurice and Pascal F.E.O.S. Formed in Germany in 1989, their first release "Cosmic Love (Approach And Identify)" (Cyclotron) is certainly identifiable as early trance. Sven Vath (Eye Q) signed them to the Harthouse label where artists were encouraged to explore more "intelligent" techno themes, their "Human EP" is the 20th release on Harthouse DE (7th for Harthouse UK) - the title track is considered hugely influential on artists who defined the early trance genre.

Pascal has worked with other pioneering artists such as Laurent Garnier and Pete Namlook in joint projects and has also issued a number of solo works. Both Maik and Pascal release sporadically, A Modern World Of Today was released in 2001 - they continue to remix and collaborate with others.

A Modern World Of Today

You Were There (MCD)