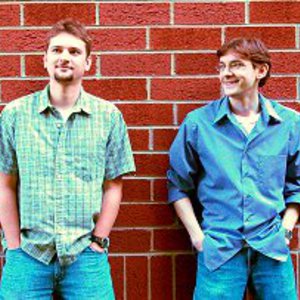 Request-A-Song.com (RAS), as a band and as a site, has quickly gained recognition on the Internet for their unique approach to writing and publishing new music. Raleigh, NC-based brothers Benj and Jeremy Edwards write and record new, original songs based on website visitor suggestions then publish them online in MP3 format. Most of the music is piano- or guitar-based alternative pop-rock with a decidedly quirky twist.

Visitors to the RAS website submit song "requests" consisting of suggested song titles or other interesting phrases. Benj and Jeremy then read the requests, and if one strongly appeals to either of them, they will write, perform, and record a completely original song based on the request, then publish it on the RAS site for either free download or purchase. The resulting songs usually turn out more interesting than anticipated, as the brothers Edwards try to take an unexpected angle on the ideas they receive. Those who submit requests to the site must sign a release that allows RAS to use their submissions without fear of legal trouble.

Request-A-Song.com has been making music since October 1st, 2002, publishing over 130 songs online and releasing their first CD, "Best Of Request - Vol. 1" in July 2003. RAS has been featured in USA Today, on BBC Radio 2, and twice on Billboard.com. Three of their songs, including "The Evil Toucan Sam," and "I Saw Janet Jackson's Boob," have been played numerous times on the "Dr. Demento" radio show. The site's free songs have been downloaded over 100,000 times combined by visitors all over the world. The site can alternately be accessed through the address http://www.requestasong.com .