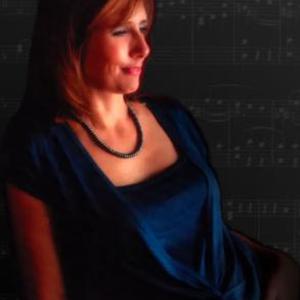 Renee' spends quiet times in the studio with her B?sendorfer, lights turned off, composing by candlelight. She begins playing and building upon whatever musical motif her muse may inspire in that moment. She realized long ago that she needed to play piano as much as she need to breathe air. She has been writing music for the past 20 years but never recorded them until recently. Music began for Renee' at the age of five playing in front of an old Zenith record player. She enjoyed singing along to the 45's of her parent's favorite songs.

Music began for Renee' at the age of five playing in front of an old Zenith record player. She enjoyed singing along to the 45's of her parent's favorite songs. She memorized the words to ?The Blue Skirt Waltz? and went around to familiar neighbors asking if she could sing for them. It was a good way to earn Popsicle money by combining her first love?. music, with her very first paying job.

Growing up in the plains area of Great Falls, Montana was a simple time in life; long before high tech gadgets children have now. Her creative spirit energized her imagination and she enjoyed many hours exploring their old upright piano. She spent so much time playing the keys, listening to every note and the vibrations of the strings that her parents finally arranged piano lessons.

Her teacher's name was May Carol Zeman and she was considered as one of the best piano teachers in the area. In the beginning, Ms. Zeman frightened Renee' because Renee' was shy. Learning to read music was extremely challenging for her. Eventually, her quiet nature learned to express thoughts and feelings through the music and she escaped into the joy of this new world every day. Playing the same song constantly for hours influenced my parents to move our piano into the basement. In her private little world she practiced and practiced.

SheI improved over time and continued with lessons through high school, playing Rachmaninoff and Debussy as favorites. During a final lesson with her teacher, May Carol, she told Renee' that out of all of her students over the years, Ms. Zeman believed that Renee' had a gifted touch and could express the soul of a song.

May Carol Zeman left this world when Renee' was 27 years old.

Renee' majored in music and later added a degree in Occupational therapy later. This combination provided unique insight and experience that gradually led to teaching piano to children with special needs and developmental challenges. As an Occupational therapist and experienced piano teacher, she was able to adapt teaching strategies with the learning process to allow the natural ability of an autistic child to learn to play piano and later play in the school talent show. It is the hope of every parent to help their children develop to their full potential.