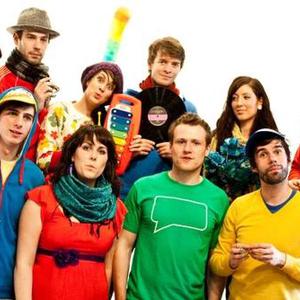 A movement of friends is a hard thing to package. When something happens locally that is real and sincere, it probably doesn't need the hype that the music industry can sometimes bring. The Rend Collective Experiment started in 2004 as a group of confused 20 somethings trying to figure out life, God and community. Then in 2007 it grew into a collective of musicians and artists trying to share with the world what they were learning.

Music grown out of an "organic environment" and a bond between the members, not only as artists but as friends and family. They are about journey music that follows God's heart and is for all, not just the religious!

A huge part of the ethos of Rend Collective Experiment is found in Amos 5 - "Away with the noise of your songs... Let justice roll like a river." Its about generating money that can help those who are less fortunate, not making them charity cases but standing with the poor and oppressed in solidarity as one family. At the minute they have committed to give the profits of sales to a project in Gulu which we believe in greatly. Is this not the "fast" that God requires of us?

As a collective they are also great believers in normalizing music, fighting against the celebrity culture and trying to build family through what they do, instead of raising up undeserved 'rock stars!'

With "The ORGANic Family Hymnal" Parts 1 and 2 already released and a 3rd one due in August '08, R.C.E. are already making their mark rather boldly in a sometimes dusty genre!!! Because members perform in both Secular and Christian markets, there is a somewhat unique approach towards the songs they write. For them music is about emotion and sincerity, leaving trite sayings in the past and embracing a new expression of worship to God.

Oh and there are about 15 of them all together so don't let the photos fool you, they are just the ones who where around the day we found a camera!!