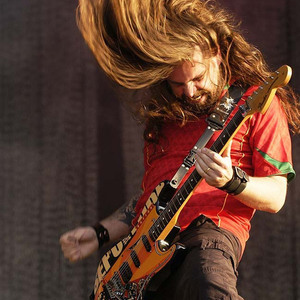 Andreas 'Sepulculo' Kisser, is the guitarist for the legendary metal band Sepultura. He has also appeared in projects such as No Cora&ccedil;&atilde;o dos Deuses, Sexoturica, Roadrunner United, Quarteto da Pinga and Asesino, as well as having produced Hammerhead's Shadow of a Time To Be, Necromancia's Check Mate and Sayowa's self-titled second album, SAYOWA. He has just released his first solo album entitled 'Hubris I & II' on Mascot Records in Europe.

Born August 24th 1968 in S?o Bernardo do Campo, Brazil to a Yugoslavian mother, from Maribor, Slovenia and a German father, Kisser was originally a roadie for founding vocalist/guitarist Max Cavalera. He was asked to join the band in 1987 following the departure of original lead guitarist Jairo Guedes.

He is largely responsible for bringing a more progressive sound to the band starting with the Schizophrenia album (1987). He studied classical guitar for several years before joining Sepultura.

During his early days, he frequently used Charvel/Jackson guitars (especially the one with Red Hot Chili Peppers' stickers and the white Randy Rhoads model for the Arise album). Recently he is being endorsed by Fender and is using Stratocaster model, though he still endorses Jackson and has been known to use them at a few live performances.