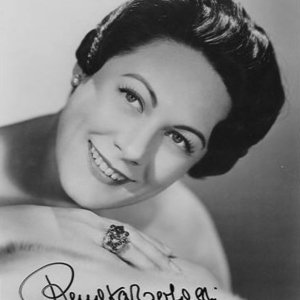 She was Italy's great rival to that other 50s/60s diva, Maria Callas - opera lovers (especially the stage door johnnies and anoraks among them)lined up to cheer on the one rather than the other. While la Callas had an enormous personality (especially on stage), a huge, and instantly recognizable voice, who broke all (or most of) the rules of interpretation, la Tebaldi had a more obviously perfect voice and singing technique - sublime, even - with a demure, somewhat conventional personality on and off the stage.

It is almost impossible to fault her voice in terms of colour, timbre and timing - she took none of Callas's risks, but for some, she was a little too "pretty".
In later life, it was widely understood that she had succumbed to mental illness, (possibly clinical depression) which of course wasnt spoken of in the media: but meant that she stopped recording or performing.
IN another area of singing, the smooth perfection of Matt Monroe as opposed to the character-filled, daring syncopation of Frank Sinatra would be a useful comparison