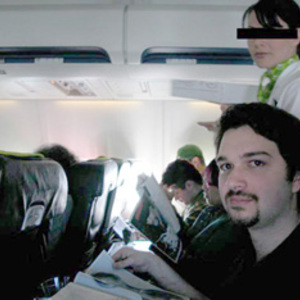 The Hamburg-City boy Denis Karimani, born in 1983, started making electronic music at the age of 13 years and got addicted to it without fail. After lonely and quiet years of experimenting and self-discovery he released his first 12" called "Hypnoconsole" on ZombieNation's Label Dekathlon Records and got remixed by Munich-Techno-Hero Richard Bartz. The first livegigs followed directly and led him into smoky rave-basements, uproarious clubs, sunny open-airs, as well as shaky party-boats...

Due to excessive and unresting music-making Denis released lots of 12"s and made several remixes in the following years. He released records on fine labels like Traum/Trapez/MBF, Areal , Dial, Weave or Liebe*Detail and made remixes for artists like Dominik Eulberg, Move D or Station17.
In 2006 he released his first, after his beloved pseudonym named, album "Remute" on Ladomat.
For future records he is also working together with great new labels like Num, Smallville, Kompass, Curle or Einmaleins amongst others, so we can expect a huge amount of new tracks in the next months and years.
Everything will remain HEISS!

Denis uses two names for his works.
He can't exactly describe anymore why, because it's a kind of irrational psychological thing.
--->
On the one hand there is REMUTE, who is more a kind of his alter-ego than his pseudonym and suddenly appears in his consciousness and is screaming out loudly "Allnight Allright!!!". You can describe the music of his "brother" roughly like following :
For a moment, one may find the well known coordinates of techno, house or electro in his tracks, but those who would like to hastily stick Remute into a category have not listened properly: Here, someone really runs riot and forms hurricanes of emotions out of different influences and moods, which carry you away, especially because you never know what is going to happen next: straight minimal house tracks mutate into chopped disco orgies, prudish techno advances meet robotized voices, which cause turbulence in the stereo-sum and what appears to start like a cool electro track might turn into a heartbreaking hymn against sadness.

On the other hand there is the real DENIS KARIMANI, who expresses his feelings and emotions and often autobiographic experiences in his tracks.
Here you can't describe it with phrases, you have to feel it!
So near, so deep.
Direct feelings paired with abstract feelings.
These musical trips are more inspired by classical track-structures and the Detroit/Chicago doctrine mixed up with all modern ways of synthesis and sampling.
Generating THE moment is the highest priority.

Generating THE moment is also the highest priority when he plays live :
His livesets are like a roller coaster ride of emotions.
Not just a great rave experience, but especially one of those ???Do you remember when????-feelings which stick although the moment itself is long gone.
His regular appearance in magazine polls for best live act of the year proves that this is not just theory.
He already played in some of the best clubs including PanoramaBar/Berlin, Flex/Vienna, Click/Hamburg, Nitsa/Barcelona, Tresor/Berlin and of course the HarryKlein/Munich.