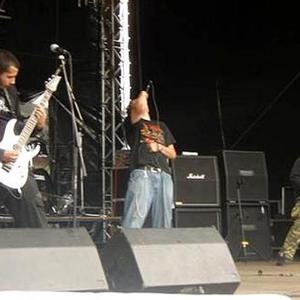 Remnants of Flesh are a brutal death metal band from Athens, Greece. The band formed in 20 April of 2005 by Thanos, John & Panos under the name Nailed Messiah. After a few months Kostas joined the band as a bass player and was made his first rehearsal recording in July of the same year. The first acts of violence were something between Morbid Angel & Krisiun but now the band has changed their style following death metal in the ways of Suffocation and Deeds of Flesh.

In summer of 2005 the band changed its name to Remnants of Flesh. New tracks are written and the band is ready to record. In the same time Panos was replaced by Theodore on drums. The band released a 3-track promo called ?Feasting Your Mutilation? on the 22nd of July. In January 2007 Thanos (vokills) and Remnants of Flesh parted ways. In the same time Thanos was replaced by Tolis (ex-Ochetus vokiller) but the thing didn't work out and Tolis left the band.

In the beginning of February Remnants of Flesh found Chris which vocal-skills was more simillar with the needs of the band. Now the band is working on their debut album entitled "Degenerated Human Cells" and will be recorded in summer 2007. Till then a few gigs over Greece will follow for the promotion of the bands first album.