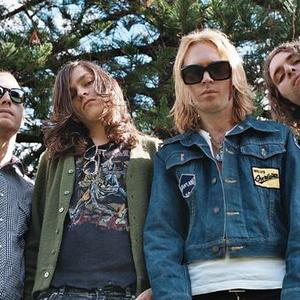 Regular John's debut The Peaceful Atom is a Bomb landed them a triple j feature album, Big Day Out appearances, ARIA nominations and the declaration of Best Rock Act at the 2009 Rolling Stone awards. Oblivious to what that all meant, they disappeared for three years. On a journey, you might say. Strange Flowers is the reason. Ten tracks. One album. Strange Flowers is the fruit of a decision by Regular John to make a record that one could play start to finish and feel as if they had taken a journey. Multiple listens will reveal many secrets but where you go is up to you.

Ten tracks. One album. Strange Flowers is the fruit of a decision by Regular John to make a record that one could play start to finish and feel as if they had taken a journey. Multiple listens will reveal many secrets but where you go is up to you.

Choosing to record again with long time collaborator Tim Powles (The Church), Strange Flowers stretches sonically and emotionally into dimensions only hinted on their debut, with Powles production bringing layered headphone bliss while retaining the power of the bands live sound.

First single Slume is an open heartbreak bandaged in fuzz, Syd Barrett slides and Zepped out time signature changes and has already been added to Triple J's playlist. The album takes you through epic multi movements like ?Sky Burial' and the Philip K Dick inspired ?Time Machine' to the fragile and melodic reverberations of ?San Isidore' and ?Devils Face'. Thick with a guitar sound not heard since the walls of Siamese Dream, the doom pop of ?Crystal Ball' and the deceptively joyous pummel of ?Strange Flower' will have you humming their melodies for days.

With Strange Flowers the band has clearly moved away from their humble stoner and garage punk origins and have stepped up to fill the vacant spaces in Australian music. A natural evolution, brought on by seemingly harsh circumstances, singer guitarist Ryan Adamson mastered the subtleties of analogue synthesizers and obscure electronics while awaiting surgery for a spinal condition that left him medicated and unable to pick up a guitar for several months. Original guitarist Brock Tengstrom departed in 2010 but rather than setting the band back, it allowed room to breathe, experiment and expand with the welcome addition of guitarist Miles Devine to the fold.

If you are tired of dinosaurs of rock still ruling the local landscape, Regular John have the answer. Strange Flowers has a heaviness, intensity and attention to detail that has been missing from Australian music for a long time. Bold and unafraid, they tap elements of 90s shoegaze, 80s post punk and 70s prog rock while keeping their feet firmly planted in the now. Strange Flowers defies genre and era. It is psychedelic. But it's not retro. It's ambitious but it's not prog. It is dark and heavy, but it's not metal. It swings to all sides of emotional and sonic spectrums, giving nods and winks to those that appreciate music in its many forms and manifestations.

Strange Flowers is what it is. And where you take it is up to you.

The Peaceful Atom Is A Bomb