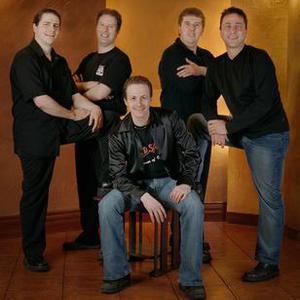 The guitarist and songwriter Simon Caron had composed some songs and dreamed of recording them in studio and of producing a first album. So that his dream comes true, he needed excellent musicians. Having worked in the field of music for a long time and established good contacts, the issue was fast resolved. So, RED SAND was created in May 2003. Besides being the guitarist of the group, Simon wrote the words and the music of the first album Mirror of Insanity, on label Ipso facto.

Besides being the guitarist of the group, Simon wrote the words and the music of the first album Mirror of Insanity, on label Ipso facto. This album was finally produced thanks to the participation of Mathieu Lessard, vocal, Stephan Desbiens, keyboards, production and arrangements, Perry Angelillo, battery and Ian C?t?, bass.

The album was put on sale at the record dealers as well as on the Internet at the beginning of April 2004. The feedback from the fans of progressive music were so enthusiastic that Simon felt the need to produce a show. As some of the musicians who had worked on the album were not available for the shows, Simon had to form a new group specifically for live appearances :

* St?phane Dorval received a classical music training. He has strong stage presence and an exceptional voice.

* Pierre Massicotte at the keyboards. A virtuoso.

* Jean-Louis Croteau at the battery. A childhood friend of Simon and an excellent drummer with a lot of stage experience.

* Last but not least, Mathieu Gosselin, reputedly one of the best bass players in the field of progressive music.

The group RED SAND delivered a first memorable show at the Liquor Store de Sainte-Foy. Following the show, Simon decided to write new songs and to record a second album which should be issued at the beginning of 2005.


Be on the lookout!