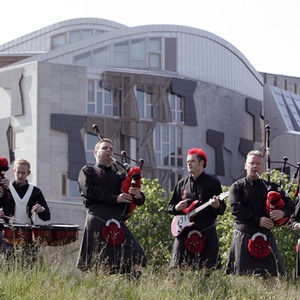 Bagpipes with Attitude, Drums with a Scottish accent, a blazing rock band and a show so hot it should carry its own health warning! The Red Hot Chilli Pipers were voted Scotland's ?Live Act of the Year in 2007 and 2010 at the Scots Trad Music Awards. Since they walked away with the top prize on UK primetime TV talent show, 'When Will I Be Famous' in 2007, the Red Hot Chilli Pipers haven't stopped for a breath, other than to inflate their bagpipes!

The Red Hot Chilli Pipers were voted Scotland's ?Live Act of the Year in 2007 and 2010 at the Scots Trad Music Awards.


Since they walked away with the top prize on UK primetime TV talent show, 'When Will I Be Famous' in 2007, the Red Hot Chilli Pipers haven't stopped for a breath, other than to inflate their bagpipes!

Taking their signature 'Bagrock' sound to the masses, The Chillis have fast become a global phenomenon, rocking far-flung shores from Melbourne to Milwaukee and everywhere in between.

With three albums already under their belts, the band's most recent release ?Music for the Kilted Generation' took Bagrock up another gear in 2010. With clever covers of ?Long Way to the Top' by AC/DC, ?Baba O'Reily' by The Who and a great version of ?Lowrider' by War- just a few examples of how well rock tunes fit on the bagpipes! Previous live album and DVD ?BLAST Live!' (REL Records, 2009) has already gone triple platinum in Scotland plus second album ?Bagrock To The Masses' (REL Records, 2008) has just achieved gold status in the UK.

The Chillis have spent much of 2011 perfecting their phenomenal live act with sell out shows across the globe. Kicking things off in April, with an eight week tour of mainland Europe then coming home in August to perform at the world renowned Edinburgh Festival and Glasgow's ?Piping Live'-the band barely had time to do their washing before jetting off again!

A six-week jaunt ?Down Under' followed with the guys managing to find time in amongst their hectic schedule to support the Scottish rugby team at the World Cup. Their Red Hot performances earned them a new legion of fans from Auckland to Adelaide!

Further trips to the USA, Saudi Arabia and the UAE saw the band cement their reputation as one of the most exciting live acts around!
The Red Hot Chilli Pipers sound is a fusion of traditional pipe tunes and contemporary anthems - tracks from across their four albums include the likes of 'Clocks' by Coldplay, ?Chasing Cars' by Snow Patrol, ?Let Me Entertain You' by Robbie Williams, Queen's 'We Will Rock You', a rock medley of Deep Purple's 'Smoke On The Water' and AC/DC's 'Thunderstruck'. Plus, 'Flower of Scotland', ?Amazing Grace' and 'The Hills of Argyll' get a look in too, Chilli style of course!

2011 has seen the originators of Bagrock take their unique sound to new heights and 2012 is set for an even bigger helping of jock ?n' roll!


"The Red Hot Chilli Pipers are sassy, sexy and hugely entertaining. They are
enormously talented musicians who are so skilled they make it all look effortless. This album stirs the blood and will enliven any party. - Lorraine Kelly
-
"Bag Rocks! The Red Hot Chilli Pipers are great live performers with passion and enthusiasm that has captivated the world - great ambassadors for Scotland. I'm a fan!" - The Duke of Argyll

"The Red Hot Chilli Pipers' twist on our national instrument is a huge amount of fun. They have taken the bagpipes to a whole new audience and given them a rock 'n' roll edge which definitely earns them the Biffy seal of approval!" ? Biffy Clyro

?No-one falls asleep at a Red Hot Chilli Pipers gig?..The Chillis give the jugglers on the Royal Mile a run for their money and ? make no mistake ? rock the house!? - The Herald, August 2010

?They skirled, they marched and most importantly, they rocked? ? Edinburgh Evening News 2008

Music For The Kilted Generation