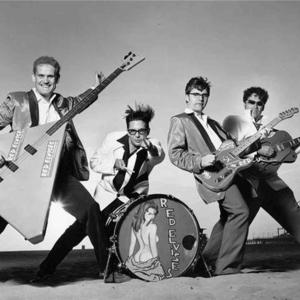 The Red Elvises are a Russian-American band that performs rock and roll, surf, rockabilly, reggae, lounge and traditional Russian styles of music. Believing that one cannot go wrong with "The King" Elvis Presley as an inspiration and with "red" being not only their favorite color but the national color of their native country, the band name Red Elvises was created. The Red Elvises were founded in 1995 by Igor Yuzov and Oleg Bernov, two Russians living in Los Angeles, California.

The Red Elvises were founded in 1995 by Igor Yuzov and Oleg Bernov, two Russians living in Los Angeles, California. Igor and Oleg met during a Russian-American peace walk and subsequently played together in a Russian folk-rock band called Limpopo. The band's third original member, guitarist Zhenya Kolykhanov (he later legally changed his last name to ?Zhenya Rock?), had also emigrated to America and had been spending time playing in Texas. For the first few months Andrey Baranov was the band's drummer, but within that year, the first American in the band, drummer Avi Sills from Austin, Texas, was added to the lineup. The four of them got their start playing on Santa Monica's 3rd Street Promenade.

When they weren't playing on the road they were busy recording and self-producing their own CDs. Grooving to the Moscow Beat was the band's first release in 1996, followed by Surfing in Siberia in 1997. In 1998, the band released their breakthrough CD, I Wanna See You Bellydance. Their music filled the soundtrack of Lance Mungia's independent film released in 1998, Six-String Samurai, a film in which they also had small roles and screen credits. With Mungia directing, the band also produced two music videos of songs from the Six-String soundtrack, Lovepipe and Boogie on the Beach, that year. A full-length concert video, Live on the Pacific Ocean was also released, showcasing their appearance at the Santa Monica Pier's Twilight Summer Concert Series.

The small screen also beckoned with television show appearances, resulting in Red Elvises' guest spot in an episode of the now-defunct Fox television series Melrose Place (Episode #206, "Suspicion") which aired on November 9, 1998. Near the end of that year they appeared on FX's Penn & Teller's Sin City Spectacular accompanied by Penn & Teller's show dancers, which aired in January 1999. They released three new recordings in 1999, two studio-produced and one live. The band's fourth and fifth studio albums, Better Than Sex and Russian Bellydance, a Russian language version of their smash album I Wanna See You Bellydance from the previous year, were both released in March 1999. Later in that same month Red Elvises' performance im San Francisco was released as the band's first live double album, Live At The Great American Music Hall.

In the summer of 1999 the FX television channel hired Red Elvises to play in Malibu on the beach for their Beverly Hills 90210 Swimsuit Beach Party highlighting a marathon airing of syndicated episodes of the hit series. FX held and flew the winners and ten of their friends to the beach party to appear on TV and dance to the band's music. February 2000 heralded a brief change in musical direction for the band with the release of their seventh CD, Shake Your Pelvis, a more electronic techno/disco style CD that greatly differed from their earlier releases. December 2000 also saw an end to Avi Sills' association with the band with his decision to move on to other musical opportunities.

The band persevered as an all-Russian three-piece during 2001 with Bernov giving up the big red balalaika bass and taking over much of the drumming. In March two new studio CDs were released, Welcome to the Freakshow, written entirely by Yuzov, and Bedroom Boogie, written entirely by Rock. The band continued their non-stop touring across America throughout the year and also toured their native Russia.

In 2002 Rokenrol was recorded entirely in Russian with the exception of two songs, Juliet by Yuzov and Sunshine by Rock, both sung in English. Rock began a side project, ZEEROK, going in a completely different musical direction, and by the end of the year decided to commit to his new band full time, announcing his departure from Red Elvises. The band kept busy during the summer months with a tour through Russia that included some filming for the upcoming film Mail Order Bride, a romantic action comedy starring Danny Aiello, Vincent Pastore, Ivana Milocevich, and Robert Capelli, Jr., returning home in August to record the soundtrack. The band also returned to television with an appearance playing themselves in an episode of the Fox action series Fastlane (Episode #3 "Gone Native").

In 2003 Yuzov switched back to guitar, this time on lead, and Bernov returned to the large bass balalaika. Completing the new lineup were another Russian, Oleg "Schramm" Gorbunov on keyboards and accordion and new American drummer Adam Gust. In 2005 they were asked to perform in the Moscow Live8 concert, along with the Pet Shop Boys and a number of local performers. In 2006 Elena Shemankova from Moscow, the first female to ever play with Red Elvises, joined the band on keyboards and was very well received. Later that year they were joined by female guitarist Beth Garner from Texas, who continued to tour with them until the end of 2007.

In 1999 and 2002 the Red Elvises released CDs in Russian, which were very well received in Russia. Subsequently they have been invited to perform there every summer, and they spend a couple of months playing in clubs in larger cities such as Moscow and Saint Petersburg, as well as Yuzov's hometown of Odessa in the Ukraine.

The band's line-up is slightly different in Russia than in North America, and features many Russian musicians who are hired specifically for that tour.

Made In Santa Monica

The Best Of Kick-Ass