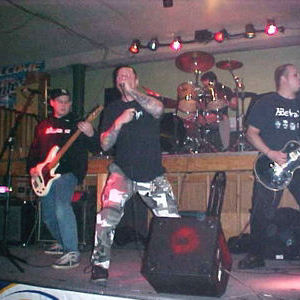 Too hardcore to be death-metal, and too death-metal to be hardcore!" This is how lead vocalist Troy Norwood describes Recourse, a mind-blowing, tour-de-force experiment in hardcore metal. With an unmatched technical tightness and an abundance of musicianship and raw talent, this crossover Maryland band has risen from nowhere to become one of the fore runners in modern day "death-core". Drawing from such legendary influences as D.R.I.

and modern favorites, Hatebreed and Lamb Of God, Recourse has abandoned contemporary musical style and structure and have emerged with a unique style and sound that has been called "a serious breath of fresh air" in today's world of metal.

Fusing hardcore and death-metal riffing with an arsenal of political observation and jazz influenced chording, Recourse has created an overwhelming, in your face, demand of attention, proving to be a force to be reckoned with. Founded in late 1999, Recourse has constantly been pushing the boundaries with their music. Releasing 2 demos and an E.P. on the band's own label, Skinlifter Records, the band saw each release sell out within months. Grabbing the attention of fans around the world with radio play in the US, and overseas markets, Recourse hit the highways and started traveling the East Coast, supporting larger name acts; Overkill, Nuclear Assault, and many more, all without a full length album or label to back them.

After a few years worth of touring and writing, Recourse headed to the studio to record their debut full length album. Produced by John Gallagher, Guitarist and Vocalist for the Death Metal band Dying Fetus, the album proves to be the band's best work to date, with even more technical song-writing and structure. With the completion of the album, Recourse hit the road again. Heading West for the first time, they self-financed and promoted a successful tour of the Mid-West and South, and soon returned home to do a small tour with their friends in Dying Fetus. With their limited self-release of the critically acclaimed "Weakening The Structure", Recourse have become a strong contender in the world of heavy music. With national and global radio rotation and record sales, Recourse have come unto their own without any previous major label support. Releasing what has been called "a work of art", and "a true 'blow' to the chin", Recourse stands out as a non-stop juggernaut of brutality and mayhem, set to dominate an ever growing musical resurgence of underground hardcore and metal. Now, with the signing to This Dark Reign Recordings and the re-release of their debut album with added bonus tracks, Recourse are poised to dominate the world of death metal.