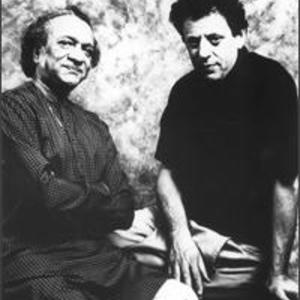 This historic collaboration of two of the most notable figures of late Twentieth Century music brings full circle a process which began when promising young American composer and performing artist Philip Glass met Indian master musician and composer Ravi Shankar in Paris in 1965. That week, Glass, studying with the great Nadia Boulanger, was earning pocket money doing notation and conducting a recording session for the soundtrack of Conrad Rook's film ?Chappaqua.? The score's composer, Ravi Shankar, was directing his ensemble from the sitar.

The Glass encounter was a rare instance of classical music reciprocity, unlike previous Shankar musical ?collaborations? .Those were actually elaborate sessions with masters of other musical traditions joining Ravi to ?jam? on his own music. Here, each composer presented thematic material to the other as raw material from which these finished pieces were fashioned. Passages contains four such co-ventures: a) two Glass compositions on themes by Shankar (Shankar / Glass); b) two Shankar compositions on themes by Glass (Glass / Shankar), c) as well as one piece from each composer completely of his own devising.

The result was an arresting example of musical collaboration.