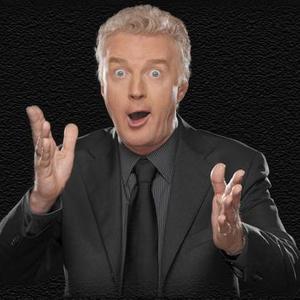 Andr? van Duin (born as Adrianus Marinus Kyvon, on February 20, 1947) is a famous and extremely popular Dutch comedian, singer, actor, stage performer, recording artist, TV presenter, radio performer, songwriter and media icon. He started his career as a parody artist in the mid-1960's, after a successful appearance on the then-popular nationwide TV-show "Nieuwe Oogst". Following this, a string of television broadcasts followed, resulting in various TV and radio shows, long-term stage shows, an almost endless stream of Top 40 hits throughout the '70s...

Van Duin released his first 7" singles in the second half of the 1960s, on the legendary Dutch label Favorieten Expres. None of them charted, however, due to lack of airplay. After scoring his first hit in 1972 with the novelty tune "Angelique" (original: "The Swiss Maid"), Andr? became a regular in the Dutch singles charts for the next three decades. In early 1976, Van Duin held the number one spot for the first time in his career, with the humorous self-written song "Willempie". The song caused controversy, as it was accused of insulting the mentally retarded. Also, it is credited with kicking Queen's "Bohemian Rhapsody" off the top spot of the Dutch Top 40.

Andr? kept releasing successful singles althrough the 1990s, but only reached pole position one more time in 1993, with "Het Pizza Lied (Effe Wachten...)". Van Duin's last Dutch top 10 hit was "Ayohee (Zo, Ken 'Ie Wel Weer)", in early 1998. After recording a 'serious' and personal album in 1999, only a few singles were released, but none of them achieved notable chart success. In the early 2000s, Van Duin is still frequenty seen on Dutch television and even briefly returns to radio.

As of 2008, Andr? van Duin can be seen on his final stage show (after a departure from theatre for nearly fifteen years), and he will re-launch his successful radio show "Dikvoormekaarshow" for the third time. Albeit being absent from the Dutch Top 40 for over a decade, Van Duin is still one of Holland's most charting acts, among artists like BZN, Normaal, Golden Earring, Marco Borsato, Rob de Nijs, The Cats and George Baker Selection.