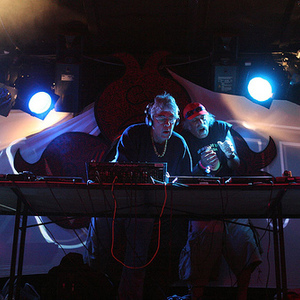 1200 Micrograms (sometimes credited as 1200 Mics) are a psychedelic trance act formed in Ibiza in 1999-. The members are Riktam and Bansi who are the duo also comprising G.M.S., and Raja Ram and Chicago. The band split up in late following ongoing disputes; Riktam was fed up writing all the music and splitting the money three ways, while Raja Ram and Chicago became irritated at Riktam and Bansi's unreliability in turning up for performances.

The name 1200 Micrograms comes from a reference to the amount of LSD that it would take to dose the four members of the group. A Terence McKenna quotation sampled in the track 'Salvia Dinivorum ': "A substance so powerful that 300 micrograms is the dose. That means 1 gram will dose 7000 people". Their music is known for the heavy use of guitars and a focus on themes related to drugs.

The idea for starting the project allegedly came to Raja Ram while he was thinking about making an album about his favorite drugs. Thus, their first, self-titled album featured 9 tracks about Ayahuasca, Hashish, Mescaline, LSD, Marijuana, Ecstasy, Magic Mushrooms, Salvia Divinorum and DMT. Not surprisingly, the tracks featured many quotes from Terence McKenna and samples from movies like Fear and Loathing in Las Vegas. The album has been a big success, and 1200 Mics even released a Marijuana music video in 2003.

The second album, Heroes of the Imagination, was dedicated to famous inventors and scientists, including Leonardo Da Vinci, Galileo Galilei, Michael Faraday, Albert Einstein, Charles Babbage, Albert Hofmann, Francis Crick, James D. Watson, and Tim Berners-Lee. This album also contains the 2003 party hit, Acid for Nothing, a trance remix of Dire Straits' Money for Nothing (the track also replaced the phrase "I want my MTV" with "I want my LSD").

Although immensely popular, 1200 Mics received almost entirely negative reviews because their albums felt rushed, cheesy and sounded too much like eurodance. In 2005 they released a live album "Live in Brazil". In 2006 a remix album was released with tracks coming from Eat Static, Astrix and Atomic Pulse amongst others. The 3rd album was called The Time Machine. Its songs were influenced by famous places and times in the past -- The Creation of the Universe, Stonehenge, Ancient India and Egypt and Greece.

Heroes of the Imagination