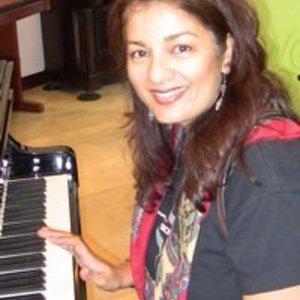 Born and raised in Bombay, a mega-metropolis on the west coast of India, Ramona Borthwick was exposed to music at an early age. Encouraged by her father, a well known musician and film composer, she began piano studies at age five, soon followed by studies in Western classical music. She was ranked first in Asia at the Licentiate level examinations in piano performance at the Trinity College Of Music and the Royal Schools Of Music, London.

Soon after she became a sought after teacher by students and educational institutions, was actively involved in training choral ensembles and also did studio session work for the music industry.

In the 1980's she began performing with local jazz ensembles, later collaborating with husband Noel Borthwick on their 1991 debut album 'Sound Matters', one of the first modern jazz recordings from India.

A move to Canada in the early 90's and later Boston, MA, allowed her to widen her artistic depth and growth as a musician, composer and teacher. "A New Leaf" her debut CD released in 2006, featured a palette of several of her compositions that were written over this transitional period in her life and received glowing reviews from critics and the international press. JazzImprov Magazine says of 'A New Leaf': "a musical journey of such extreme depth", while JazzReview commented "Borthwick displays an amazing talent for composition... her fellow musicians bring the music to a level that is rarely shown on a debut release." Billboard Magazine wrote: "Ramona Borthwick has made a major statement with this superb initial release."

Her latest project, released in November 2009 and her second CD release as a leader, showcases her evolution as an artist and composer. "One Of Us" is a celebration of planet Earth, reflecting on the urgency for us to act as protectors of its bounties. The ten original compositions written specifically for this project, feature Ramona's distinctive writing, playing and vocal styling, as well as great performances from trumpet/flugelhorn player Ingrid Jensen, guitarist Noel Borthwick, bassist Johannes Weidenmueller and drummer Adam Cruz. Even more so than the her previous release, Ramona's compositions are a highlight, yielding deeply harmonic music that stimulates vibrant and spirited playing from the quintet.

A gifted composer, Ramona's music conveys a story like quality, spiritual depth, infectious energy and intuitive flow, free of clich?s. While being rooted in the jazz tradition, her compositions often draw from other musical influences such as ECM jazz, Brazilian music, and her legacy from India.

Ramona currently resides in Boston, MA, where she continues to write and perform. She is also actively involved with music education, conducting workshops and lessons from her studio. A graduate in Economics, she holds degrees in piano performance from the Trinity College and Royals Schools of Music, London, UK. A talented graphic artist and web designer, her company Leitmotif specializes in graphic design & web development, and is well known for its work helping musicians and artists establish their web identity since the mid 90's and the early years of the web.